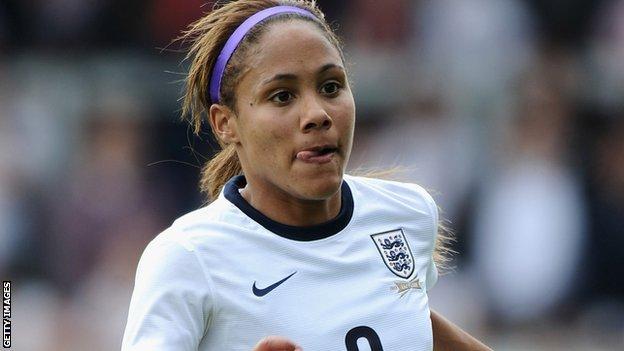 England defender Alex Scott could earn her 100th cap against Russia on Monday but says that landmark is secondary to the team's need for three points.

The right-back believes her side must win their second Euro 2013 group game if they are to stay in the tournament.

England suffered a shock 3-2 defeat by Spain on Friday.

"If we don't win we know we will be going home," she said. "It's hard because it might be a proud moment but winning the game is the main thing."

The top two teams in each of the three groups will be joined in the quarter-finals by the two best third-placed teams.

So England could still qualify by drawing with Russia and winning their last group game against France on Thursday.

But with Russia also pointless at the bottom of the group after losing 3-1 to France and, with England never having beaten the French, Hope Powell's side will be eager to accumulate points at the Linkoping Arena.

England's loss to Spain was their first against those opponents in 17 years, but their situation is identical to the one they faced four years ago when they reached the Euro 2009 final.

In Finland, they lost their first match to Italy and faced Russia in their second group game, which they won 3-2 after going two goals behind. England subsequently finished third in their group.

"We've been in this situation before so the panic is not setting in yet," added Arsenal player Scott, who will join four other centurions in the squad if she plays on Monday.

"We know we have to go out on Monday and get a result. It's a must-win game for us and sometimes with England we don't do things the easy way, so maybe now we have nothing to lose."

The result against Spain was England's second consecutive defeat after losing to tournament hosts Sweden in a warm-up match on 4 July.

Spain earned victory in injury time when goalkeeper Karen Bardsley deflected an Adriana cross into her own net.

England had twice replied to Spain goals, with defender Laura Bassett making it 2-2 with a minute left.

But her hopes of crowning her first major tournament start with an important strike were wiped out by Spain's late winner.

The 29-year-old Birmingham player said: "When I scored, we all thought it was going to be OK at that point. We just had to take a deep breath and focus. We wanted to take the game to Spain when they were vulnerable, but then a moment of madness cost us.

"When the ball crossed the line it genuinely felt as though someone had punched me in the stomach. We have everything in this squad - courage, strength and determination - and we know we can always come back, but to throw it away like that was so disappointing."