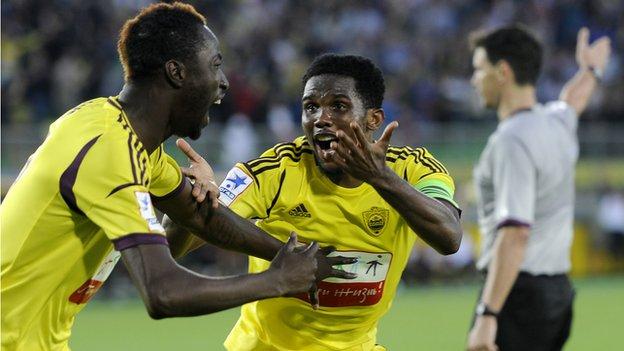 The first match day of the new season in Russia brought a number of goals from its African stars.

But a goal apiece from two of continent's big names was not enough to secure a win for big-spending title favourites Anzhi Makhachkala.

Anzhi, who splashed out about 240m euros ($310m) since they were purchased by oil and metal tycoon Suleiman Kerimov in 2011, were held to a 2-2 by Lokomotiv Moscow.

However, the hosts failed to see it through as late substitute Roman Pavlyuchenko rounded off the scoring with just a minute to go to level matters.

Anzhi had a chance to score a winner in injury time as they were awarded a penalty after Traore was felled in the box but Brazilian goalkeeper Marinato Guilherme saved Eto'o's spot-kick.

Elsewhere, Democratic Republic of Congo forward Mulumba Mukendi was on the scoresheet for Volga, who drew 2-2 away at Dynamo Moscow.