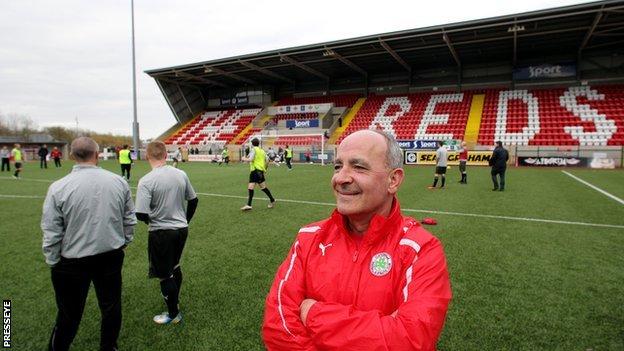 Cliftonville manager Tommy Breslin has reported no fresh injury concerns for the first leg of the Champions League qualifier against Celtic at Solitude.

The Reds completed their run-up to their glamour second qualifying round tie by beating Crumlin United 9-2.

An additional 1300 seats have been installed at the north Belfast ground to take the capacity to 5000.

Strike pairing Boyce and Gormley both bagged hat-tricks in the win over Lurgan Celtic.

"Everyone is fit and ready to go, except for long-term injury absentees Chris Scannell and Barry Holland, while Ciaran Donaghy is unavailable as he is just back from honeymoon," said Breslin.

"We have played in Europe before and had some good performances but to play a world renowned team like Celticis just beyond belief.

"Remember just a few months ago they were in the last 16 of the Champions League and beat Barcelona."

Cliftonville trained at their home ground on Monday night as they continued their preparations for the much-anticipated visit of the Scottish Premier League champions on Wednesday evening.

Neil Lennon's side have conceded 12 goals as they lost all four of their friendlies during a stint in Germany.

The Lurgan-born former Northern Ireland captain has seen midfielder Victor Wanyama leave for Southampton and striker Gary Hooper may also have played his last game for the Parkhead club.

Nigeria defender Efe Ambrose is set to play in the clash in Belfast after being given extra time off after his side's participation in the Confederations Cup in Brazil.

Welsh duo Joe Ledley and Adam Matthews are likely to miss out through injury while trialist defender Steven Mouyokolo has still to sign a contract.

Celtic were to have been at home first, but agreed to a switch at Cliftonville's request, so the return leg will be played in Glasgow on Tuesday, 23 July.

The Scottish giants are back in competitive action less than eight weeks after their Scottish Cup final win over Hibernian.