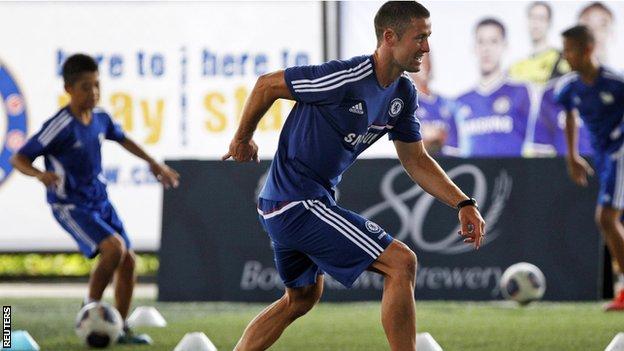 Chelsea defender Gary Cahill believes the new Premier League season will be wide open, with up to seven teams challenging for the title.

The Blues are in Thailand on the first leg of their Asian pre-season tour.

Cahill believes champions Manchester United and runners-up Manchester City will again be near the top, but thinks other teams are closing the gap.

"Squads are getting stronger and stronger. There's six or seven teams pushing to get up there," he said.

Cahill, speaking to BBC Sport during a children's coaching session that the club held at its football school in Bangkok, added that next season "is going to be difficult" at the top of the league.

Chelsea are due to play Manchester United's conquerors, the Singha All-Stars, on Wednesday in what will be Jose Mourinho's first game in charge since his return as manager.

That match could feature striker Romelu Lukaku, who has returned to Chelsea after a season on loan at West Bromwich Albion.

Asked what impact his time at WBA had made on him, Lukaku said: "I became a man. When I arrived at Chelsea I was still a kid."

After Chelsea lifted the Champions League trophy in May 2012, Lukaku said he felt no joy at the victory because he had played no part in the cup run.

He also expressed concern that, in signing him for £10m for Anderlecht in August 2011, Chelsea were guilty of "throwing their money around".

"I was immature and it showed at the end with the Champions League stuff, but that's normal because every player wants to play," he said.

"But now I've become a man. Steve Clarke taught me how to behave as a man. His technical staff and his players helped me a lot. They changed my life really.

"People have a different view on me, so really it helped me a lot by going there."

Two other Chelsea players who have returned from loan spells are midfielders Josh McEachran and Kevin de Bruyne.

England Under-21 international McEachran, who spent a season in the Championship with Middlesbrough, believes there is a chance he may be sent away again this season by Mourinho.

"I do want to stay at Chelsea because I'm a Chelsea player, but if the boss wants me to go out on loan then I'll go out on loan and see what happens," said the 20-year-old.

De Bruyne, who has returned from Werder Bremen having been signed from Belgian side Racing Genk in January 2012, is more upbeat about his chances of playing under Chelsea's new boss this season.

"It was the plan that I was going to go on loan last year, but I also had a really good year with my national team," said the 22-year-old.

"I've improved myself and I have to show that I can achieve a level that's good enough for playing for Chelsea."