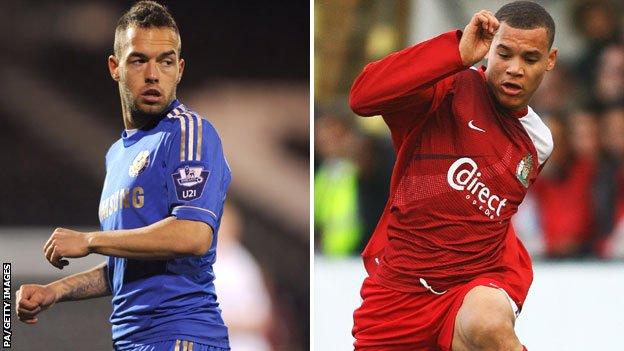 Walsall have signed Troy Hewitt on a free transfer and Chelsea striker Milan Lalkovic on a six-month loan deal.

Forward Hewitt, 23, who was available following his release by QPR in June, has signed a one-year deal.

"Milan is a player I've tried to sign on loan a couple of times previously," said Saddlers boss Dean Smith.

"I am delighted to finally be able to bring him here."

Lalkovic is yet to make an appearance for Chelsea's first team.

The new arrivals will help plug the gaps left by the departure of fellow strikers Will Grigg (Brentford) and Febian Brandy (Sheffield United).

Hewitt, who joined QPR in 2011 from Harrow Borough, has had loan spells at Dagenham, Bury and Colchester.

"I've spoken to a few people about him and had some very good feedback," said Smith..

"He's a lad who has come through the non-league system to earn his chance in the professional game.

"He's been with us since the start of pre-season and has displayed a tremendous attitude and work ethic."