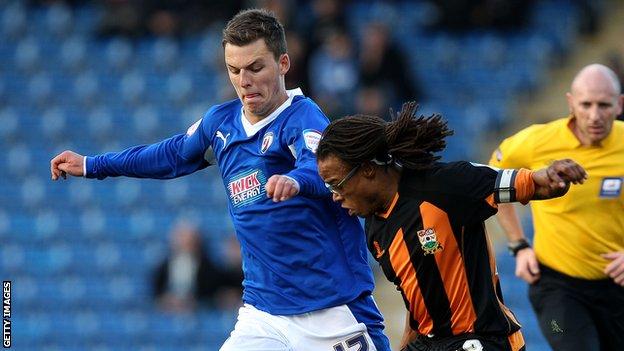 Huddersfield Town midfielder Chris Atkinson has joined League One side Tranmere Rovers on loan until January.

The 21-year-old appeared nine times for the Terriers last term after a successful loan spell at Chesterfield.

Atkinson, who is Tranmere's fifth summer signing, at Huddersfield earlier this year.

Rovers have already added Ryan Lowe, Stephen Foster, Evan Horwood and Akpo Sodje to their squad ahead of the new League One campaign.

Manager Ronnie Moore told the club website: "We did really well out of the long-term loan system last season, with Jake Cassidy, Liam Palmer and Ben Gibson all playing a lot of games for us. Hopefully Chris will have as big an impact as them.

"He impressed me in his loan spell at Chesterfield last season and he worked his way into the first team squad at Huddersfield as a result of how he had progressed."