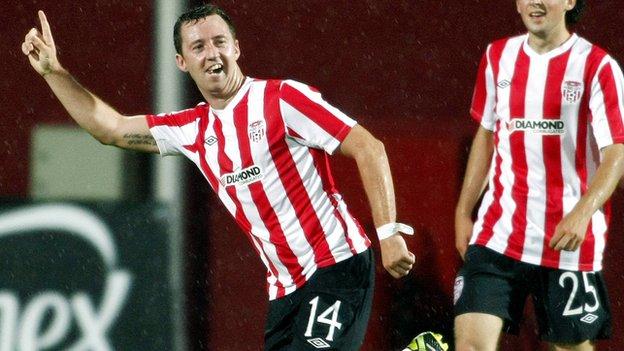 Derry City kept their Europa League second qualifying round tie against Trabzonspor alive by scoring twice in a 4-2 first-leg away defeat in Turkey.

David McDaid and Paddy Kavanagh replied for the visitors but a Barry Molloy own goal saw the Turkish outfit enjoy a single-goal advantage at half-time.

Centre-half Giray Kacar headed home the fourth from a corner after the break.

Mierzejewski scored the opener with an overhead kick in the 10th minute and then Paulo Henrique had the simple task of firing home after Ger Doherty spilled the ball six minutes later.

McDaid, recently returned to the club after a spell with York City, pulled one back with a fine individual piece of vision and skill after 25 minutes.

The forward fired a left-foot shot into the bottom corner from 20 yards to stun the home supporters.

Kavanagh levelled on 33 minutes courtesy of a weak right-foot shot which trickled in at the near post with the aid of a deflection.

Trabzonspor continued to dominate possession and Henrique had the ball in the net soon after the interval, only to see the flag go up for offside.

Kacar relieved the hosts' nerves by scoring his side's fourth, but McDaid and Ryan McBride both went close to reducing the deficit.

"I am bitterly disappointed with our defending for the four goals we conceded, it was very poor," said Derry manager Declan Devine after the game.

"But in terms of character, commitment and desire I couldn't criticise my players. The tie is still very much alive," he added.

The second leg will be played at the Brandywell next Thursday night.