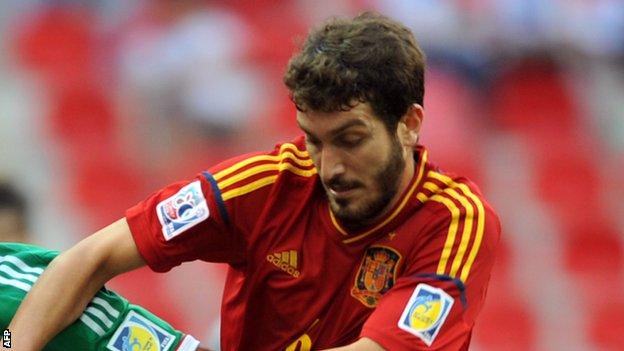 The 20-year-old has penned a four-year deal with the Premier League new boys, after an undisclosed fee was agreed.

Campana made 20 appearances for Sevilla and was a regular for Spain in the recent Under-20s World Cup in Turkey.

"Everybody knows the way I want to try and play football and how fantastic Spain have been over the past few years, so I'm delighted to get a lad of this quality.

"I think Campana's a fantastic player, his maturity is unbelievable, and the way he plays the game is the way I believe it should be played.

"He's going to be a great star of the future and the present."

"Over the last two years, I've had some problems with my hometown club, but I'm really excited to play in the Premier League."

Sevilla president Jose Maria del Nido said on Monday the sides had agreed a £1.75m fee Campana after he turned down a new contract.

"He wanted to leave and we accepted that," Del Nido told Sevilla's website.

"An agreement has been reached with Crystal Palace for two million euros, plus add ons and a percentage of a future transfer."