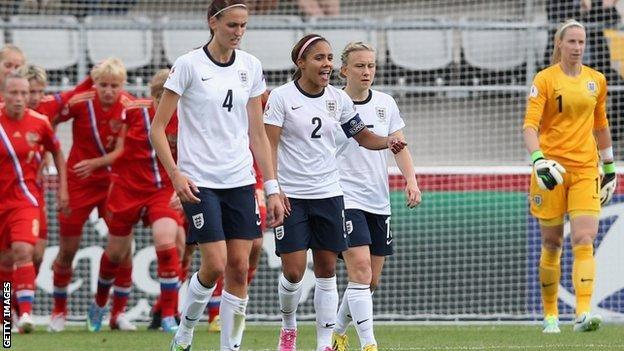 England boss Hope Powell bemoaned another "sloppy" performance and said her team face a fight to stay in Euro 2013 after drawing against Russia.

Toni Duggan scored in injury time to earn a 1-1 draw for England, who face France in their final Group C match.

"We are in a fight now, we know that," said Powell, whose team have one point from their two games.

"I think we are lacking some real quality in terms of executing that final ball, it's sloppy."

England hit the woodwork twice against Russia but conceded when their opponents, the lowest ranked team in the tournament, struck through Nelli Korovkina shortly before half-time.

Duggan rescued a point but coming after her team's 3-2 defeat against Spain in their opening game, Powell said the Lionesses had once again failed to play to their potential.

"We have conceded really silly goals, we have discussed it and we need to tighten it," added the 47-year-old. "We are not playing to our max.

"It didn't go according to plan, we wanted three points. We didn't perform to our best again, we need to look at it again and see the reasons why."

What exactly England will need from their third group match will not become clear until after the final round of games in Group A and Group B.

Victory over France would represent their best chance of qualifying for the last eight, but that is not guaranteed.

A draw could see them sneak through as one of the two best third-placed finishers, but that is extremely unlikely.

England have never beaten France under Powell, and recorded their last victory over their European rivals in 1974.

But it took penalties for Bruno Bini's side to knock England out of the 2011 World Cup, and the two sides also drew 2-2 in a friendly last October in Paris.

Powell said: "It's a big task. France are one of the favourites, but we know what we have to do, we have no choice.

"We know it is a mountain. We've drawn with them recently which has been really good. Sometimes it's easier to play teams you are not expected to beat for some strange reason."

Duggan's goal came in the third minute of injury time after the Everton striker had previously hit the bar. And the team seemed to be boosted after Kelly Smith's late introduction despite England's record scorer still working her way back from a shin injury.

"The gamble paid off bringing Kelly on so we did very well to get the goal and we are still in it," added the England coach.

"It was a crazy game. We dominated the game, but again we conceded a sloppy goal. I'm disappointed, the girls are disappointed but a point is better than no points.

"In patches we were a bit slow coming out, a bit deliberate. We just didn't shift it quick enough. Was it good enough? No it wasn't because we came away with a draw."

Goalscorer Duggan said: "I've been kicking my heels, I've been dying to get on but Hope's given me the chance and thankfully I've repaid that, so I'm happy.

"Now we just have to move on to the big one against France because I don't think we've shown what we can do in this tournament and there's still a lot more to come from everybody else."