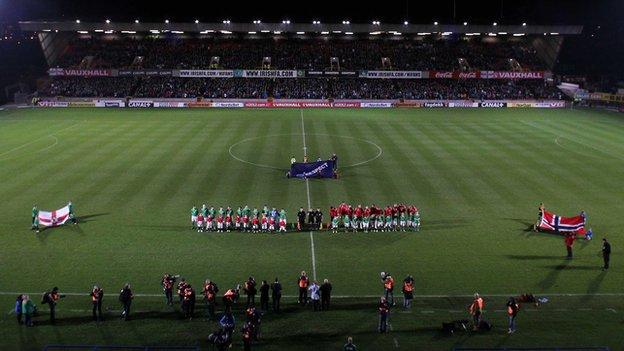 Crusaders have given their backing to an outline settlement put forward by a judicial review over the £25m redevelopment of Windsor Park.

Crusaders won the right to legally challenge the plan.

Details of the settlement have not been disclosed, but Crusaders said it has the "potential to benefit the entirety of the football family".

The south Belfast venue is Northern Ireland's national football stadium, but is owned by Linfield who are rivals of Crusaders in the Irish Premiership.

They argued the proposals would create extra revenue streams and give an unfair advantage to a club already in a financially dominant position.

A judge ruled that Crusaders had established an arguable case that the redevelopment of Windsor Park amounted to unlawful state aid for their rivals Linfield.

Mr Justice Treacy granted leave to seek a judicial review on that point, and on an alleged lack of transparency around the proposed scheme.

The outline settlement proposed by the judicial review was discussed by Crusaders members on Monday night.

"Crusaders FC can take pride in the action we have taken," added club chairman Stephen Bell.

"Understanding the imperatives for all parties, and the urgency associated with the decision, we will nonetheless take time with our legal team to shape the right deal for the football family.

"The outline proposal before us sets in place important principles for the local game. It is therefore vital that we get it right.

"All parties are moving in the right direction and we are committed to a fair deal for all."

The Windsor redevelopment is part of a plan that also includes the Ulster rugby ground at Ravenhill and the GAA's Casement Park.

A total of £110m has been set aside for the three building projects through the Department of Culture, Arts and Leisure.