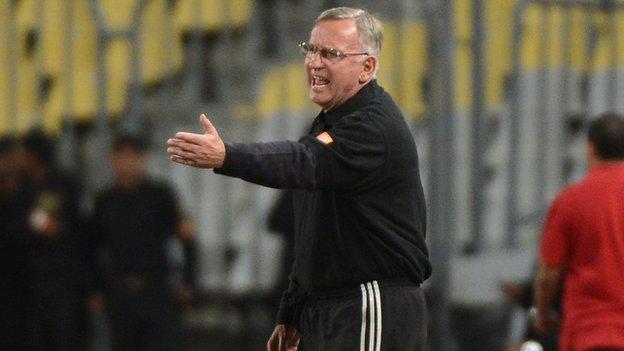 Hosts Zambia and holders Zimbabwe have made it through to the Cosafa Cup final after winning their semi-finals against South Africa and Lesotho on Wednesday.

Zambia went through on penalties after a goalless draw with Bafana Bafana - the 2012 African champions converted all five of their spot-kicks, with the decisive penalty netted by captain and centre-back Bronson Chama.

South Africa's Lerato Chabangu was the unfortunate player to miss, his shot parried by Danny Munyau.

Bafana Bafana will reflect on two chances in the second half when they rattled the woodwork; first when the ball cannoned on to the upright from a corner and Ruziagh Gamaldien failed to tap in the rebound and then when substitute Chabangu hit the post in the 81st minute.

Chipolopolo's victory sets up a final in mining city Ndola this weekend that will be a repeat of the last one in 2009 after Zimbabwe fought back to beat Lesotho 2-1.

The Warriors had won 11 and drawn three of the previous 15 clashes against Lesotho with the lone defeat sustained 12 years ago.

But they fell behind when Notlalepula Mofolo swept in a low cross from Thapelo Tale after Zimbabwe failed to cut off a throughball.

However, Tendai Ndoro, who made his international debut last weekend, levelled on 15 minutes by controlling a long throw-in and firing past Phasumane Kholuoe.

The forward struck again 10 minutes later when he connected with an Eric Chipeta cross and the ball flew wide of the goalkeeper and into the net.

Lehlomela Ramabele could have taken the match to extra time when he had only Maxwell Nyamupangedengu to beat three minutes from time, but blazed wide.

South Africa and Lesotho will play for third place on Saturday in the curtain-raiser to the final.

Meannwhile, the losing quarter-finalists played off in the plate competition on Tuesday.

Angola beat Malawi 3-2 to advance to a final on Thursday against Mozambique, who were 1-0 victors over Namibia.