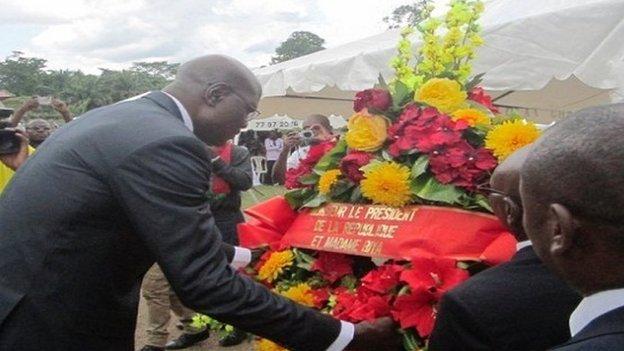 Louis Paul Mfede was a Cameroon legend; a hero on the pitch and an ambassador off it.

'Fefe' or 'Bolingo', as the midfielder was fondly called, was part of the squad that took Cameroon to the quarter-finals of the 1990 World Cup and had earned a place in his country's folklore.

But on 10 June he died, aged 52, of a lung infection at the Yaoundé General hospital because he could not afford the money to buy the drugs prescribed for him at the hospital.

It was a terribly sad end to the life of a man who, alongside the likes of Roger Milla, Thomas Nkono, Libih Thomas, Maboang Kessack, Youmbi A Yankan and Jean Claude Pagal, helped Cameroon reach their greatest high 23 years ago in Italy.

The achievement of Mfede and his team-mates made young Cameroonians dare to dream - and memories of him dribbling past three players and instilling his side with the confidence to pull off a famous 1-0 win over Argentina in their group opener will never fade.

Yet when the Cameroon Football Federation (Fecafoot) and the Ministry of Sports and Physical Education were notified of his desperate situation by his wife Francoise, they did not move to help.

Mfede's son Federick revealed the only succour came from former team-mate Milla, who helped to foot hospital bills when the family was running out of finances.

At Mfede's burial, Sports Minister Adoum Garoua decorated the fallen hero with the medal of national order of valour and laid a wreath on his grave in his village, Nkol-Kosse in the Lekie division, Centre region.

But some have asked why Mfede was not given care rather than a posthumous award.

And Thomas lamented: "Ambassadors, as we were once called, we spend our last days miserably. When we see only a few football lovers around Mfede's coffin, I say this is bad for a national hero. It is painful to see him leave this world like anonymous person."

Thomas Nkono, widely thought to be the best African goalkeeper of all time, added: "Those who sacrificed for football have to be recognised by the state, but to see Mfede die on the streets made me feel bad."

And former central defender Benjamin Massing reflected: "It is a pity he died in such a condition, abandoned to himself."

Despite the absence of care and a state burial, Mfede - or "magic left foot" as he was called by 1980 African Footballer of the Year Jean Manga Onguene - is remembered by his team-mates as a jovial person who welcomed and united players.

Mfede's case is a typical of the precarious situation of former Cameroonian footballers, especially those from the 1990s.

"We footballers are not taken care of," regrets Libih. "But there is no unity among us; it is not the state that will do everything.

"It is true that we sacrifice our life to fight to the flag of the country but at the end we become normal people. We have to face life after our career.

"It is a pity that we, the older players, are not putting any structure in place to project our interests. We run after emptiness and fight on TV because we want to come back on stage. It is pitiful and complicated, we fight among ourselves and do not construct anything."

"There is need to better the situation for all the players," he said.

"It is necessary to put in place a strong structure for those in activity and those who have retired. Younger players today do not even know those who played before them, we made them dream of becoming what they are today, but nothing is done at the base level."

As for a solution, Libih believes players should use their qualities to the benefit of their future and channel their energies either in administration or coaching.

"There is need for an association to be put in place to protect the interests of sports men and women because it is not only football, there are athletes who have done wonderfully for the country, and there is need to cater for the life of all", he said.