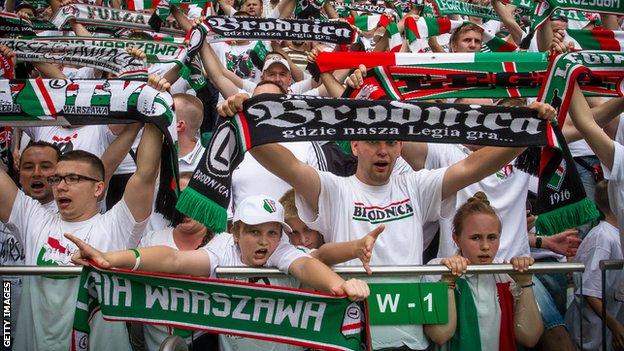 The New Saints have been overwhelmed by demand for tickets for their Champions League tie against Legia Warsaw says managing director Mike Harris.

The Welsh champions have switched their second qualifying round first leg tie against the Polish champions to Wrexham's Racecourse Ground.

Harris expects this Wednesday night's game to be a 4,500 sell-out.

The New Saints last played Polish opposition in 2002 when they lost to Amica Wronki over two legs in the Uefa Cup, with their home leg staged at Newtown.

Demand from British-based Polish football fans as well as supporters' travelling from Poland has meant the game against Legia has been switched to Wrexham from Oswestry's Park Hall.

Harris said demand for tickets had been greater than for the Saints' Champions League tie against Belgian side Anderlecht in 2010, which was also played at Wrexham.

"Originally the tie was being staged in Oswestry but obviously our capacity there is 1,100," Harris added.

"Immediately under the safety of supporters, players and everybody else it was advised we should take the game to somewhere which could handle the game.

"We've limited the total overall capacity to about 4,500 on safety advice from the police.

"The Poles themselves took 1,000 tickets on the first day so we were able to put them on one side,"

"But in the UK we've probably had enquiries from Polish people who have taken a general interest in the game.

"There's quite a large Polish community in the Wrexham and Welshpool areas who are coming along to watch a team from their own country."

The New Saints have only progressed on one previous occasion in the Champions League when they beat Irish side Bohemians in 2010 to set up a third qualifying round tie with Anderlecht.

And Harris admits the Saints face a difficult task in reaching the third qualifying round once again at the expense of the nine-times Polish champions.

"The Polish side were probably the stiffest opposition we could have had," Harris said.

"There were a lot of other names in our particular group that would have been a lot easier opposition.

"It would have been nice to have had easier opposition but it's obviously one where you've got to take whatever you get in front of you.

"We've got to look at it realistically and just hope we give a good account of ourselves."