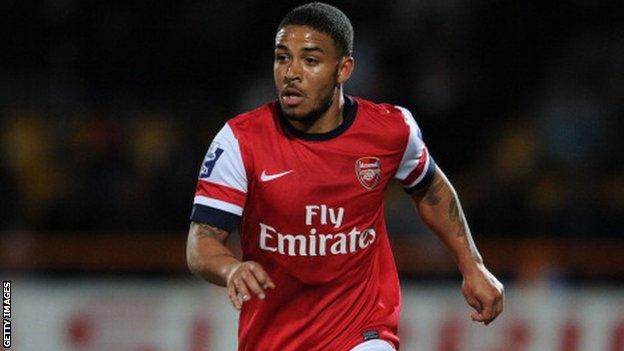 The 20-year-old has signed a one-year deal, subject to international clearance and Premier League approval.

Meade will initially train with the Swans Under-21s, but is already looking to break into the first-team squad.

"My aim is to start impressing in the Under-21s and hopefully give [manager] Michael Laudrup another option at left-back for the first team," said Meade.

"Swansea are a growing club and they've come from League Two by passing their way out of the divisions."

"He was a great player, and the chance to learn from him is a massive opportunity for me.

"And he is not afraid to give youngsters a chance to prove themselves either."

Meade spent nine years at Arsenal and made his debut when he came off the bench in the 7-5 Capital One Cup victory over Reading in October.

Two months later, Luton-born Meade made his first start for the Gunners in a Champions League defeat at Olympiakos.

"I've been at Arsenal since I was 11, so to come to Swansea was the perfect move for me in terms of style," said Meade.

"Swansea are a growing club and they've come from League Two by passing their way out of the divisions.

"I think everyone has been very impressed by what they have achieved in the Premier League, and it's great to be a part of the club."