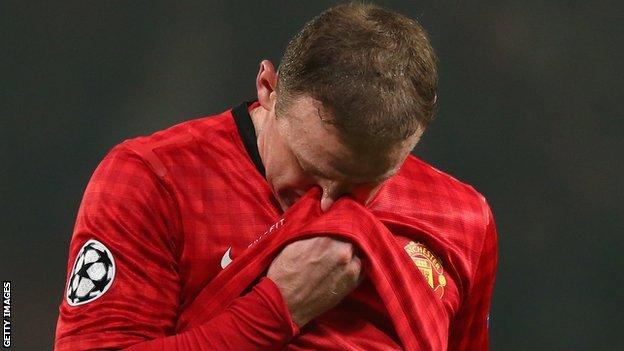 Wayne Rooney has been left angered and confused about his position at Manchester United, after manager David Moyes hinted the striker would not be his first choice at Old Trafford.

Rooney, 27, has expressed his disappointment to senior figures at the club and insisted he would not accept a squad role behind Robin van Persie.

The England forward has two years left on his contract with United.

He has been linked with Premier League rivals Chelsea and Arsenal.

Moyes, talking to Sunday newspaper journalists on the club's pre-season tour in Bangkok last week, repeated and "had a major role to play".

But Rooney was angered when his manager added: "Overall, my thought on Wayne is that if for any reason we had an injury to Robin van Persie we are going to need him. I want as many options as possible."

United executive vice-chairman Ed Woodward underlined the club's stance by saying he had no fear about allowing the former Everton frontman's contract to run down.

Woodward said: "There are no contract renewals that are being discussed. I am not sitting down with any player on an extension and there is no trigger date in the diary.

"Would we be afraid to run a contract down? Of course not."

Rooney believes he has nothing left to prove at United after nine successful seasons and has held talks to make that point to club officials since returning early from the pre-season tour of Australia and the Far East with a hamstring injury.

After being left out of a number of key games by Sir Alex Ferguson last season, he but sources close to the player insist he has not handed in a formal transfer request.

Chelsea are monitoring the situation, with manager in a BBC interview on Tuesday.

Mourinho believes a lack of playing time for Rooney would pose a problem for England and manager Roy Hodgson ahead of next year's World Cup in Brazil.

"If Wayne is a second choice for Manchester United, then the national team will be affected," said Mourinho.

Senior figures at United had planned to monitor the striker's form and fitness this season before deciding on his future.

But with Rooney increasingly disgruntled by the messages coming out of Old Trafford, the situation may yet come to a head in the coming weeks.

Woodward is due to return home following Saturday's game against the A-League All Stars at Sydney's ANZ Stadium, but Moyes will not be back in England for another week as United have further matches in Japan and Hong Kong before their tour reaches its conclusion.