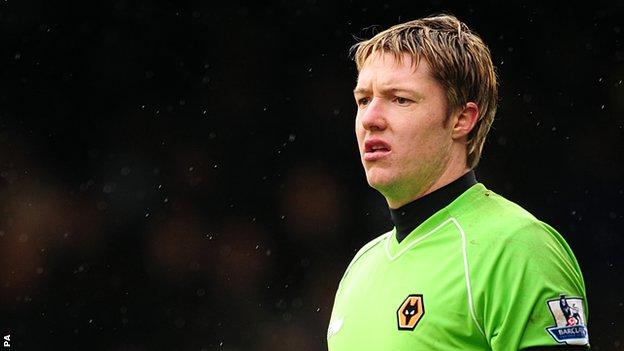 Wolves goalkeeper Wayne Hennessey has made his comeback from injury after 16 months on the sidelines.

The 26-year-old had been out since April 2012 after suffering a cruciate ligament injury against Sunderland.

Hennessey suffered a further setback after tearing the repair on the ligament in November 2012.

The Wales international played 45 minutes in Wolves' 2-1 friendly win at Wrexham on Tuesday.

"It's terrific to see him back. We hope this is the first of many games now in a Wolves shirt," Wolves head coach Kenny Jackett said.

"We'll do well with him but we actually think he's ready and he's progressed.

"If it hadn't been for the summer he would have probably played maybe a month ago. In training every day he looks very good.

"I just feel personally that everything will be alright now - he just needs games to get his match sharpness."

Jackett believes Hennessey can re-establish himself as Wales' number one even though he will be playing in the third tier of English football.

Hennessey won the last of his 38 caps in a 4-1 friendly win over Norway at Cardiff City Stadium in November 2011.

"He'll be a fantastic option and we want to see him back for both club and country," added Jackett, who himself won 31 caps for Wales.

"If he plays well I do think he can [regain a regular Wales spot].

"He was established before in League One and he's a superb professional as well."