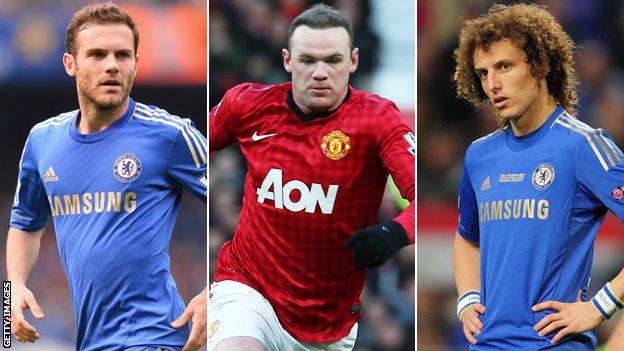 Manchester United have rejected Chelsea's offer for Wayne Rooney and insisted the striker is not for sale.

Chelsea have confirmed making a bid for the 27-year-old but denied they would be willing to include either Juan Mata or David Luiz as a make-weight.

United rejected the offer on Tuesday night but Chelsea are expected to return with an improved bid.

Rooney has reiterated his desire to leave United after manager David Moyes said he was not his number one striker.

And Chelsea boss Jose Mourinho confirmed his admiration for Rooney in a BBC interview in Bangkok on Tuesday.

Rooney has been left angered and confused by recent messages coming out of Old Trafford, most noticeably the suggestion from new manager Moyes that Robin van Persie is his main striker.

The Scot said last week: "Overall, my thought on Wayne is that if for any reason we had an injury to Robin van Persie we are going to need him."

Rooney has expressed his disappointment with his situation to senior figures at the club and insisted he will not accept a squad role behind the Dutchman.

United have refused to comment on the latest twist in the saga, with their players in Sydney on the second leg of their pre-season tour.

But Chelsea released a statement on Wednesday, expressing their disappointment that news of their bid had leaked out.

They also denied that any player was included in the offer, despite sources close to the talks claiming otherwise.

"Chelsea can confirm that yesterday it made a written offer to Manchester United for the transfer of Wayne Rooney," read the statement.

"Although the terms of that offer are confidential, for the avoidance of doubt and contrary to what is apparently being briefed to the press in Sydney, the proposed purchase does not include the transfer or loan of any players from Chelsea to Manchester United."

United insist they will not be bullied into selling Rooney, despite the England striker's disgruntlement, and are determined to deal with Rooney's future on their terms.

With Manchester City, who are hopeful of completing the signing of Sevilla striker Alvaro Negredo this week, unwilling to follow up their historic interest, Bayern Munich and Real Madrid showing no interest and Barcelona having signed the Brazil forward Neymar, Chelsea have emerged as the likeliest destination for Rooney.

Paris St-Germain have also been linked with the former Everton player, but the French champions have just signed Uruguay striker Edinson Cavani from Napoli.

In addition, Rooney is understood to be reluctant to move abroad.

Rooney may now submit a formal transfer request to force the issue, but there is no guarantee that United will grant him a move to a Premier League rival such as Chelsea.

United are comfortable with the situation and in a stronger position than 2010, when Rooney threatened to leave only to be persuaded to stay by former manager Sir Alex Ferguson.