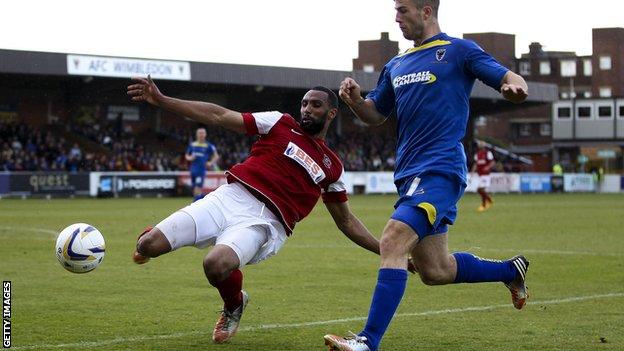 Nathan Pond wants to celebrate his testimonial year at League Two side Fleetwood Town with a sixth promotion.

The defender has been with the Cod Army, having joined while they were playing in the ninth tier of English football.

"It's been a great journey and I hope it can continue," the 28-year-old told BBC Radio Lancashire.

Graham Alexander's side are preparing for their second year in League Two and, having added significant league experience since the end of last season, they will be among the favourites to go up when the new campaign begins on 3 August.

"Nathan is incredibly deserving of a testimonial. It's fantastic he's achieved 10 years at the same club, even more so given the progress we have made. To have somebody who's got the talent to go through the leagues is an incredible story."

"Everyone should have their own expectations and we're an ambitious club," Pond added. "We're used to promotions and hopefully this season we can get promotion.

"You've got to go for the top. There's no point playing football if you don't want to win. You've got to aim for top spot."

Pond, who has played more than 300 times for Fleetwood, made his debut in a North West Counties Division One match against St Helens in front of 81 people.

As a part-time footballer, he worked as a driver delivering bakery supplies, and only became a full-time professional when Fleetwood won promotion to the Conference Premier in 2010.

Next season he could find himself facing Portsmouth, who won the FA Cup in 2008 and were playing in the Premier League as recently as three years ago.

"I didn't expect to be playing against them when I started my career at Fleetwood," said Pond, who

"It's been a gradual progression. When I first joined Fleetwood, I wanted to play in the Football League. I've been lucky enough to be at a club that's been successful and we've been on a great journey together."