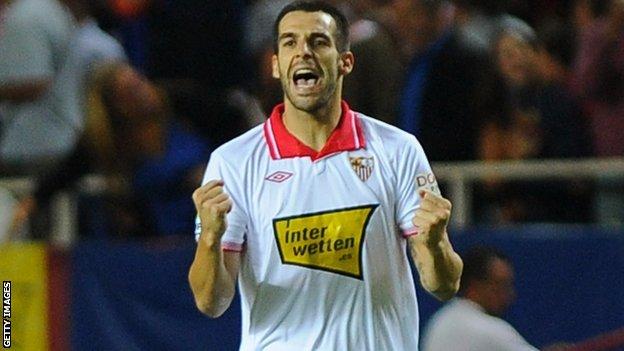 Negredo, 27, arrived in Manchester on Thursday to undergo a medical before finalising the deal.

Fiorentina attacker Stevan Jovetic could be City's next summer purchase.

The 23-year-old is rated at around £28m, and has previously attracted interest from Arsenal and Manchester United.

But Negredo is the first deal completed as City spend big in the transfer market to try and win back the Premier League title they lost to arch-rivals Manchester United last season.

At a farewell press conference in Seville on Wednesday the former Real Madrid player said he was looking forward to taking his career to the next stage.

"For four years I have been very happy, but I think my time was over here," the forward, who scored 26 La Liga goals last season, said.

Ex-Sevilla winger Navas, 27, sealed a £14.9m transfer on a four-year deal earlier this summer and Negredo said: "I am happy to be spending another year with him."

"This is a big deal for Sevilla, the second most important in our history after we sold [now-Barcelona full-back] Daniel Alves, and the player will sign the contract of his life.

"Everyone should be happy - it is a great deal for all three parties."