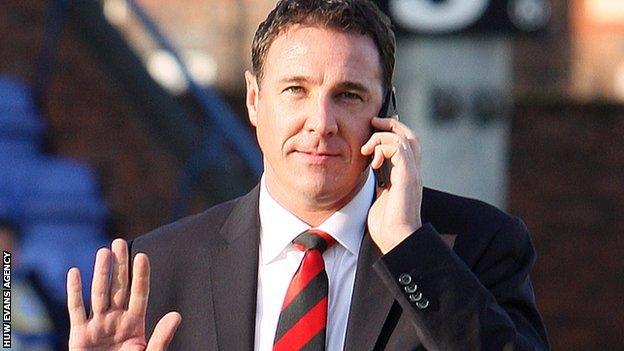 Cardiff City manager Malky Mackay remains calm about the club's lack of business in the transfer market ahead of their Premier League debut.

The Bluebirds have only signed Danish striker Andreas Cornelius, but Blackpool winger Tom Ince turned down a move to the Championship winners.

Mackay confirmed he is looking to sign players and is confident they will be in place in time for the season.

"We have targets and they will come in at different stages," said Mackay.

I have recruited 30 players now in two years, so myself and my team know exactly the way we want to go about it

"Ideally, you want everyone in early but if you look at my track record in the last couple of years it is about getting the right person and if they are the right person they adapt quickly."

Cardiff have signed Denmark international Cornelius on a five-year contract from FC Copenhagen for a club record £7.5m.

But Cardiff saw Blackpool's England Under-21 winger Ince turn down a move to the Welsh capital.

for Ince and he held talks with the newly promoted Premier League side but decided to stay at Bloomfield Road.

The Welsh side are currently on their pre-season training camp in Switzerland and Mackay admits he is prepared to sign players right up to transfer deadline day.

"As far as I am concerned we have to be very cute in bringing in players to the football club," said Mackay.

"Ideally, you would love to have everyone in for day one of pre-season, but that is never going to happen when you are looking for good players and there is competition for those players.

"There are lost of different stages to go through before a player signs on the dotted line."

Mackay says he has a good track record in the transfer market but will only sign players he believes will improve his squad at the Cardiff City Stadium.

"It has to stack up financially," said Mackay.

"And [it] has to be someone who is better than what we have got here.

"That being the case I then have to look for a level of player that can improve our football club. That is never easy at any club.

"I have recruited 30 players now in two years, so myself and my team know exactly the way we want to go about it."