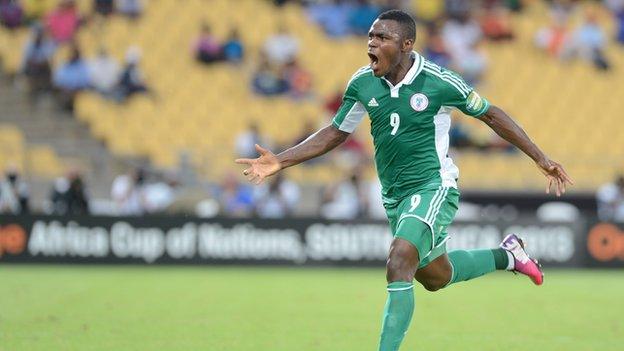 Newcastle United's Ameobi returns after the removal of a clause in his club contract that stopped him playing at the 2013 Africa Cup of Nations.

While Emenike, the joint-top scorer at the Nations Cup, is back after injury.

Goalkeeper Vincent Enyeama has been omitted, but Obinna Nsofor is included for the first time in two years.

Coach Stephen Keshi is delighted to have the players back as they prepare for a crucial World Cup qualifier at home to Malawi in September.

The Super Eagles must avoid defeat in that game if they are to secure a final play-off spot for next year's tournament in Brazil.

"It's a great opportunity to be able to invite all these players for this important friendly against South Africa," Keshi told BBC Sport.

"It's a competitive friendly and we are giving opportunities to some players, building our momentum and encouraging others making a return.

"We need to focus on the players in this squad, respect them and not focus on those not here."

The game is set to be played on 14 August in Durban.