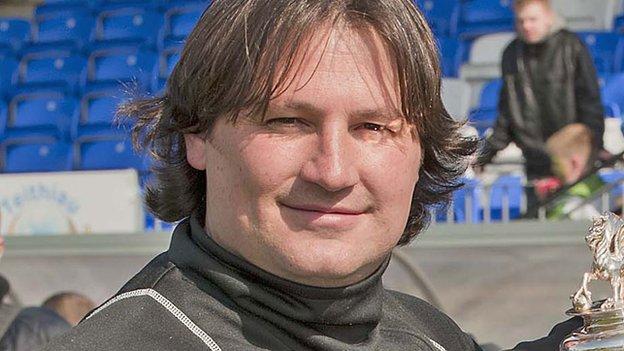 Director of Football Craig Harrison was left to rue how The New Saints let a 1-0 lead slip away against Polish champions Legia Warsaw.

TNS lost the first leg of their Champions League second qualifying round clash 3-1 at the Racecourse.

Ryan Fraughan put the Welsh Premier champions 1-0 ahead at half-time.

"The second-half they were the better team, but I thought we had the better chances in the first half," said Harrison.

"We weren't particularly troubled and the players have done fantastically well, been very disciplined and adhered to our game plan.

"I thought it worked and we were dangerous on the counter-attack."

Harrison admitted Fraughan's 11th minute goal settled his side's nerves but the game could have changed if striker Alex Darlington had scored with his 40th minute strike.

Darlington saw his superb shot hit the post and rebound into the Legia Warsaw goalkeeper's arms.

"We knew if we were going to have a chance we had to get after them and score in the first 15 or 20 minutes," said Harrison.

"It couldn't have gone any better but we have one (shot) which has hit the inside of the post and come back out.

"I think that could have changed the whole dynamic of the game.

"We knew at half-time that they were going to come out all guns blazing and have a go at us.

"We are not talking about mugs here, they beat Partisan Belgrade at the weekend and I can remember them beating Rhyl 12-0 over two legs.

"We are talking about a top, top team full of internationals."

TNS travel to Poland to face Legia Warsaw in the second leg at the Polish Army Stadium on Wednesday, 24 July.