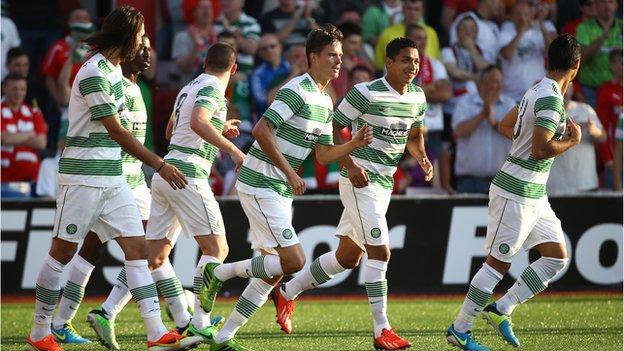 Cliftonville manager Tommy Breslin rued the fact that his side conceded "three preventable goals" in the Champions League first leg game against Celtic.

"We could have defended better but they are a class act - they opened us up and the 3-0 scoreline was about right.

"There were a lot of good performances in our side and we created chances, but the players didn't have the composure to put them away," said Breslin.

"It's all good preparation for the start of the Irish League," he added.

"We matched them for periods but just couldn't sustain it for the full 90 minutes."

"Celtic's full-time training showed as they were quicker, stronger and fitter than us - we made three mistakes and that was that," added Reds' striker Liam Boyce.

Barry Johnston argued that "for the first 25 minutes we gave as good as we got".

"Their sharpness makes all the difference at this level, but we gifted them three goals," added the midfielder.

Celtic boss Neil Lennon commented that it had been "a real privilege" to bring the Scottish champions to Solitude.

"The atmosphere and the occasion were fantastic, but we had a job to do and we did it. I felt if we got the first goal that would kill the game off, and that's the way it turned out," said the former Northern Ireland international.

The second leg of the second round qualifying tie will be staged at Celtic Park on Tuesday.