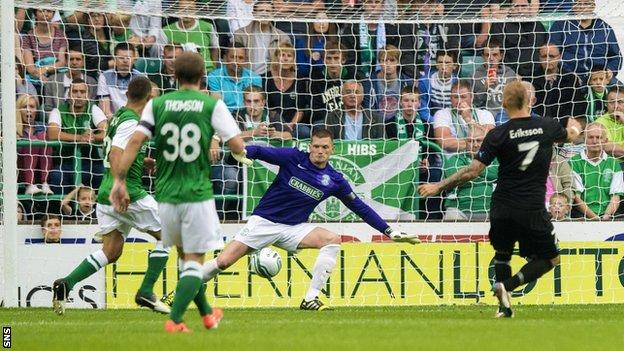 Malmo will face Swansea in the Europa League third qualifying round after a ruthless display in Leith completed an aggregate win over Hibernian.

and were clinical in front of goal in the first half at Easter Road.

Strikes by Magnus Eriksson and Emil Forsberg were added to by Markus Halsti and Miiko Albornoz before the break.

And efforts by Tokelo Rantie, Jiloan Hamad and Simon Kroon completed the rout in the second half.

With such a handsome win, Malmo will be confident going into next Thursday's first leg at the Liberty Stadium, though Swansea are unlikely to be nearly as vulnerable in defence as Hibs, who sustained their worst ever European defeat.

A 16,000-strong crowd gathered to cheer on Pat Fenlon's side and also pay tribute to the late Hibs forward Lawrie Reilly with a minute's applause before kick-off.

The visitors were given less time on the ball than they had enjoyed in the early stages of last week's encounter but it still took Hibs some time to carve out a decent chance, Jordon Forster heading Liam Craig's corner wide.

And before too long Malmo took charge of the match and the tie with a blistering four-goal burst in a 20-minute spell.

An intricate move on the left ended with Eriksson converting Rantie's low cross.

Hibs captain James McPake limped off to be replaced by debutant Fraser Mullen and the re-shaped defence were soon struggling to cope with more pressure from the Allsvenskan side.

Eriksson fired against a post moments before Forsberg curled home following a one-two with Simon Thern.

Halsti then netted with a drive from just inside the box and the hosts' misery continued when Albornoz cut in from the right to sweep the ball in off the post.

The hosts seldom looked like reducing their hefty deficit after the interval as Malmo continued to find openings.

Rantie was waiting to pounce and add his name to the list of scorers after Williams had spilled a shot by Hamad.

A free-kick by Hamad evaded Williams for the sixth goal of the evening and Kroon, who had replaced Forsberg, finished well off Rantie's cut-back for number seven.