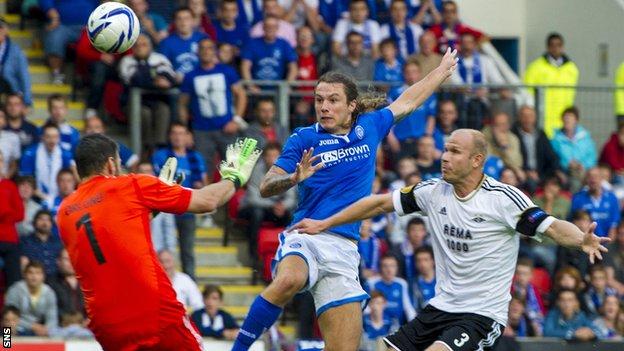 And they held on to secure the win over two legs, which sets up a third qualifying round tie with FC Minsk.

The Belarussian side secured their progress with an aggregate win over Valletta.

Victory for St Johnstone means they go one stage further in the competition than last season's campaign under Steve Lomas.

Tommy Wright's second competitive match in charge of the Perth side had been pre-empted by his assertion that the match would be "one of the biggest games in the club's history".

The large McDiarmid Park crowd of 7,850 certainly reflected that, but the buzzing atmosphere was pierced early on when striker Soderlund stroked past Saints goalkeeper Alan Mannus.

May spent the bulk of last season on loan at Hamilton, where he scored 26 goals, and his restoration to St Johnstone's starting XI in place of the injured Chris Millar paid off.

The 20-year-old did well to stay onside and outdo the dithering Rosenborg defender Mikael Dorsin to convert Wotherspoon's lofted ball.

Wotherspoon, May and Nigel Hasselbaink continually threatened the defence of the Norwegian league leaders, who had Tobias Mikkelsen and Soderlund to do likewise to Saints' rearguard.

The second half, especially, was a stern test for St Johnstone's back four, whose bravery was underlined by Steven Anderson putting his body on the line on more than one occasion.

Soderlund and Jonas Svensson often looked dangerous but most of the chances created ended up going the wrong side of the post.

Orlund, meanwhile, had plenty to deal with as crosses from Tam Scobbie and Wotherspoon came his way.

At the death, defender Jon Inge Hoiland had a glorious opportunity to get the vital second away goal for the visitors, but Mannus saved the weak shot.

St Johnstone head to Belarus to face Minsk in the first-leg on Thursday 1 August.