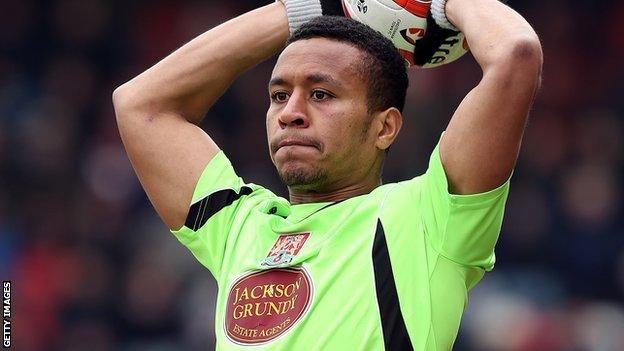 Artell, 32, had not played for the Cobblers since October prior to this week's 6-0 friendly win at Cogenhoe.

Widdowson told BBC Radio Northampton: "David is a great character and a great leader and talker.

"I like playing alongside him and I'd definitely like to see him stick around - everyone has got a lot of respect for him and he's a good player."

After recovering from his Achilles injury, Artell went on loan to Wrexham, playing in 11 matches, including the Blue Square Bet Premier play-off final against Newport.

Artell was unlucky with the timing of his injury last season - he had scored four goals in 14 appearances and looked solid.

Lee Collins and Ben Tozer can play at centre-half but Kelvin Langmead's operation may open the door for Artell, and possibly Darren Purse as well.

Northampton next play Peterborough at Sixfields on Saturday and, with Kelvin Langmead undergoing another operation on his knee, Artell could continue at centre-back alongside trialist Darren Purse.

"We've got a tougher test on Saturday but these games are always good," said Widdowson.

"I thought all the trialists did very well. Lateef and JJ have been good, Darren Purse brings a lot of experience and he knows what he's doing. Gary Deegan has done very well - he's got great enthusiasm and energy.

"I think we've made some really good signings so far. I think it's looking promising this season."

Manager Aidy Boothroyd is considering which players he might try to keep at the League Two club.

"I was really pleased with all of them," he said.

"I can't keep them hanging around forever so there will be decisions made on them in the next couple of days.

"I've got to balance the budget and [knowing] which players are going to be fit for the first game of the season."