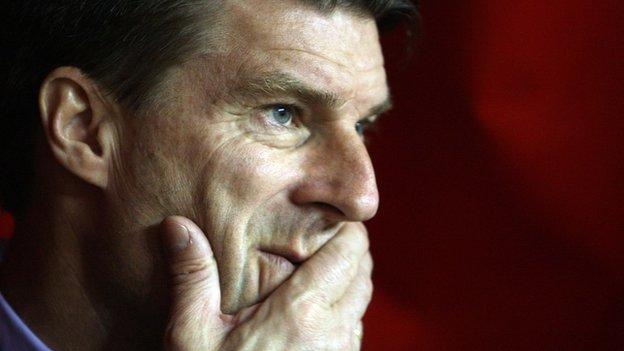 Swansea manager Michael Laudrup is looking for a second striker after ruling out a bid for former Wigan man Franco Di Santo.

The Swans has been linked with Argentine Di Santo, 24, when his Wigan contract expired this month.

Laudrup admits he would consider taking a big-name player on loan.

"I think Di Santo is a good player, but I don't think he has the characteristics we are looking for," said Laudrup.

"I am looking for a different kind of player.

"But everyday I read we are going for this player or that player, a Dutch player and then Ghanaian player.

"If I signed half of the players we have been linked to I would have 35 players here.

"I have also spent a certain amount of money, so it won't be a big signing but for me it doesn't matter.

Laudrup, who guided the Swans to their first major trophy when they lifted the Capitol One Cup last season, has already signed striker Wilfried Bony from Vitesse Arnhem for a club record £12m.

Bony, who scored 31 goals in 30 league appearances for Vitesse last season, has been signed to complement Spanish striker Michu, who scored 22 times for the club last season.

But Laudrup claims he wants to add a "different kind" of striker to his squad for their third season in the Premier League.

"We need one more, a different kind of striker," said Laudrup.

"We need one with different characteristics to Bony and Michu, but we can wait and we don't have to sign this player today or tomorrow or this week or in two weeks.

"The biggest gap up front is closed now with Bony, but I am very happy with the other signings too.

"Jonjo (Shelvey) is a very important British signing, coming into midfield and gives us something different.

"We have competition in the squad and it raises the level."

The investment in the squad is a show of support for manager Michael Laudrup, who had said the Liberty Stadium outfit would have to strengthen for the 2013-14 campaign to build on last season's success.