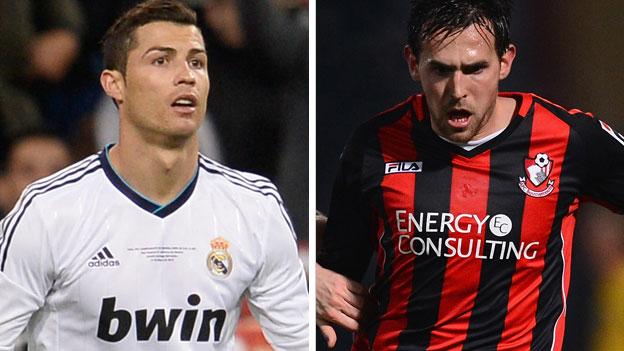 Bournemouth full-back Charlie Daniels says he will not be fazed about facing the man he regards as the world's best player when Cristiano Ronaldo and Real Madrid visit the Cherries on Sunday.

Daniels, 26, is likely to be given the job of stopping Madrid's flying wingers which could include Ronaldo.

And he says he is relishing the opportunity to face the Portuguese.

"He is arguably the best player in the world and I'm looking forward to it," Daniels told BBC Radio Solent.

When asked how he intended to stop the former Manchester United man, Daniels joked: "Kick him."

He added: "No, the same as any player, try and watch the ball and not look at his dancing feet.

"You just see the shirt and not the face until there is a break in play. You just go into automatic mode."

Real will be fielding their first team, so players including Karim Benzema, Angel Di Maria, Kaka and Luka Modric could possibly be included in the Real squad.

Daniels said he was desperate to face the nine-time European Cup winners.

"Everyone is worrying about whether they are going to be in the team rather than the game itself," he added.

"It does matter, for nostalgia really. I am not going to have too many opportunities to play against Real Madrid in my career.

"Everyone is really looking forward to it. Everyone wants to play, is up for it and raring to go.

"We have to press them, play high tempo and try and get the ball back and keep it. I don't think there is a big difference in fitness but they can keep the ball.

"We all watch Champions League football, we try and learn off these players and there will be a few starstruck people."

Fellow Cherries defender Ian Harte has knowledge of Spanish football having played for Levante and he has urged his new team-mates to keep possession and not give the opposition too much respect.

"Don't give the ball away," Harte told BBC Radio Solent.

"Madrid are one of the best teams in the world. It should be a great occasion and we need to go out there and express ourselves and if there is a tackle to be made to go through with it and take someone out, otherwise we will be punished."