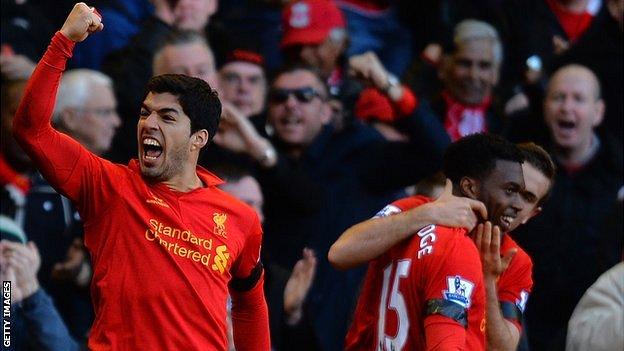 Luis Suarez will remain at Liverpool "unless something drastic happens", according to manager Brendan Rodgers.

Suarez's Anfield future is in doubt, with the 26-year-old striker wanting to play Champions League football.

"There has been lots of speculation about Luis moving to another club but, as I said, he is very much a Liverpool player," Rodgers added.

Arsenal have had a £30m bid rejected for the Uruguayan, who has said "two or three" sides are interested in him.

Liverpool have consistently stated that Suarez - who scored 23 Premier League goals last season - is not for sale.

The issue of the ex-Ajax player's destiny has dominated proceedings at Anfield since he admitted his interest in a potential switch to Real Madrid in May.

However, speaking ahead of Suarez joining up with his team-mates on their pre-season tour of Indonesia, Australia and Thailand, Rodgers insisted: "No matter who the player is, nobody is bigger than Liverpool.

"Luis Suarez is a wonderful player and he is still very much a Liverpool player.

"Luis is a very important member of this squad and I am looking forward to working with him again this season after he had such a fantastic season last term."

Speculation has also grown about Suarez's future since he was punished with a 10-game ban at the end of the April for biting Chelsea's Branislav Ivanovic. He still has to serve six games of that suspension next season.

That incident followed the eight-game ban he was given in December 2011 after being found guilty of racially abusing Manchester United's Patrice Evra.

Suarez has complained about his disenchantment with life in England, stating he was "not prepared to continue suffering at the hands of the English journalists".