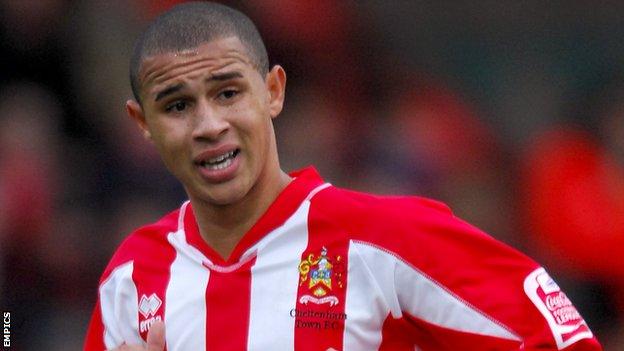 Midfielder Ashley Vincent says he feels like he has returned home after re-signing for Cheltenham Town.

The 28-year-old started his professional career at Whaddon Road and spent four years with the club before leaving for Colchester in 2009.

He has spent the last two seasons with Port Vale but turned down a new deal with the League One newcomers to move closer to his hometown of Birmingham.

"People have been saying it's a coming home," he told BBC Gloucestershire.

"It's a great feeling. It's exciting and a chance for me to get my family back home.

"I had some offers in the summer to go elsewhere, long distances away, but we decided Birmingham is where we want to be.

"Hopefully I'm joining a team on the up and we can have some success like the last time I was here."

Vincent started as a trainee at Wolves before being signed by then Cheltenham manager John Ward in 2004.

He made 131 appearances for the Robins and was part of the 2005-06 squad that won promotion to League One.

He played alongside League Two top scorer Tom Pope and hopes to replicate the same form with 21-goal Jamie Cureton, who made his move to Cheltenham this summer from Exeter.

"Jamie came second behind Tom in the goalscoring chart and it's always important to have a good one in the team," said Vincent.

"We showed at Port Vale last year that if you have someone who can get a goal out of nothing then it can get you extra points in a game and see you over the line.

"I hope Jamie can do that for us this season and I can also chip in with my fair share."