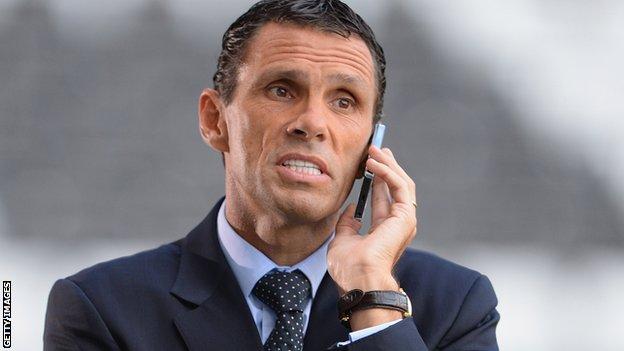 The Uruguayan was suspended after the end of the campaign and then sacked for gross misconduct in June.

"It got triggered by a phone call four days before the game against Crystal Palace in March," Bloom said at a fans' forum broadcast on BBC Sussex.

"He phoned me up and he made it clear to me that he wanted to leave at the end of the season."

He added: "I had a great relationship with Gus for three years. So it's just very, very disappointing the way things finished."

Poyet was under contract with Brighton until 2016 but had previously made no secret of his ambition to manage in the Premier League.

Albion were one point off the Championship play-off places at the time of Poyet's call to Bloom - eventually going on to be beaten in the play-off semi-finals - and Poyet went on to turn down the chance to take over at Reading later that month.

Following an unsuccessful appeal against his dismissal the former Chelsea and Tottenham midfielder is yet to find another managerial job but he will appear as a pundit on Match of the Day on BBC TV this season.

On Poyet's phone call to him, Bloom added: "He didn't want to discuss it at all.

"He said that if he could leave, if it would be allowable for him to leave the next day that would be fine.

"So this was hugely shocking to me and it was something I had to manage between then and the end of the season.

Former Chelsea and Spurs midfielder Poyet joined Brighton in November 2009 with the club in a relegation battle in League One.

He led the Seagulls to safety that season and then won the League One title in his first full campaign in charge.

After the move to the Amex Stadium in summer 2011, Brighton finished 10th in the Championship table.

Their fourth place last season is the club's highest finish since 1983.

"Obviously the key was the players and the team and our promotion push. I didn't want anything to get in the way of that.

"And then lots of things happened between then and the end of the season which I don't want to discuss."

Bloom says his target for the coming campaign is to mount another challenge for promotion.

"I just want to look forward now because we've got Oscar here, we've got a great coaching team with Nathan [Jones] and others and I'm looking forward to the season ahead," Bloom said.

"I don't want to put Oscar under too much pressure before the season even starts. It's always a difficult one.

"We aim to get to the Premier League. It's a very competitive division as we know and every season, at the start of the season, we have to try and have a squad we think is capable of promotion.

"I certainly think this season we have that."

Meanwhile, Bloom confirmed he hopes the squad will be strengthened further before the end of the transfer window.

"Certainly between now and the end of August we'll be looking for a couple of new faces."

You can listen again to BBC Sussex's Brighton & Hove Albion fans' forum via the BBC iPlayer for the next seven days.