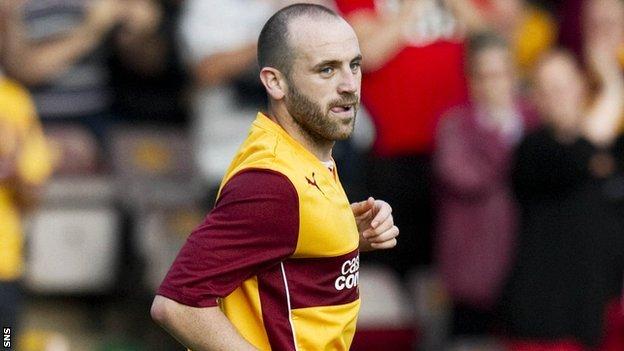 Motherwell have signed forward James McFadden on a one-year deal.

"I am really pleased to have it all sorted," McFadden told the club website.

"My relationship with the supporters and how they are with me certainly played a part in my decision."

McFadden had spells at Everton, Birmingham City and Sunderland in between his stints with the Steelmen.

After becoming a free agent in January, the Scotland international made his Fir Park return the following month, scoring five times towards the end of season 2012-13.

McFadden added: "When the manager asked me to go to Spain [for pre-season], I made up my mind then that I was going to come back and I am really looking forward to the season ahead.

"It's familiar surroundings; obviously I really enjoyed it last season, I hope the fans will be happy and I am happy to get it all done."

Motherwell chief Executive Leeann Dempster said the club was delighted to have retained the "iconic figure".

"The board have been very pleased with how the summer recruitment plan has gone thus far and are still hopeful of adding some more new faces in the near future," she added.