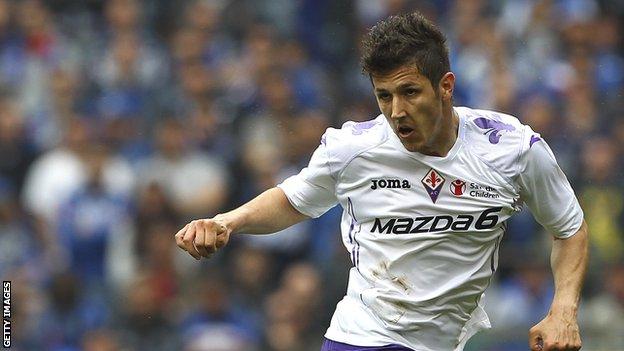 The 23-year-old, who has won 27 caps, arrived in Manchester on Friday to undergo a medical before City finalised the deal.

Jovetic had attracted interest from Arsenal and Manchester United.

With the arrival of Jovetic and who scored 26 La Liga goals last season, City have taken their spending since the arrival of Pellegrini to almost £90m.

They have already signed Navas for £14.9m and Fernandinho from Shakhtar Donetsk for £30m.

Jovetic scored 13 goals in 31 games for Fiorentina last season and will help Pellegrini fill the void left by the departure of Mario Balotelli and Carlos Tevez.

City manager Pellegrini has left the club's pre-season training camp in South Africa to return home to Chile to deal with a personal matter although he could rejoin the squad in Hong Kong early next week.

Assistant manager Brian Kidd, who had a brief spell in charge after Roberto Mancini's sacking at the end of last season, took charge of City's 2-1 friendly defeat to AmaZulu in Durban.

Kidd said: "Manuel's had to go back to Chile for personal reasons.

"Hopefully he will be in Hong Kong on Tuesday, but we are not quite sure at the moment. You want the boss here for obvious reasons.

"The team were well prepared by him for this game. It's been a good work out in South Africa with two tough games."