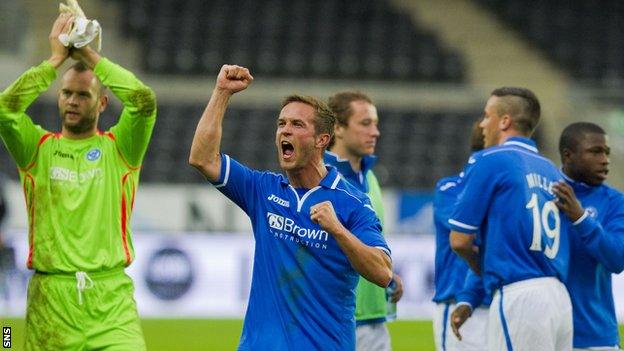 Frazer Wright's 19th minute goal brought a 1-0 victory against the Norwegians in Trondheim.

"I told them at the end of the game that these nights don't come along too often," the Saints boss told BBC Scotland.

"They're a credit to Scottish football and they proved what can be done."

Going into the game, many felt St Johnstone would be up against it, given that Rosenborg currently lead Norway's Tippeligaen league which is half-way through its season.

In contrast, this was the Perth side's first competitive game of the new campaign.

"We came here with a lot of belief," said manager Wright.

"Their fitness levels were magnificent and that got us the result because in the second half we were under a bit of pressure, and that's understandable because they're a good side."

And debutant Wotherspoon had a deflected effort which home goalkeeper Daniel Orlund saved well after the break.

"From the first whistle we played some good counter-attacking football," Tommy Wright said, who highlighted the performances put in by goalkeeper Alan Mannus and forward Nigel Hasselbaink.

"At 1-0 I thought we maybe could've had another goal. We felt set plays were going to be important. We had people who were good at attacking the ball because we didn't think they did that well.

"I'm just so proud of the players and how they went about their business."

Wright also added his appreciation to the travelling Saints fans.

"The players have given them a night to remember."

Goalscorer Frazer Wright echoed the thoughts of his manager.

"The fans were brilliant - you heard them all the way," he said.

"We went out for a cool-down at the end and they were still singing away.

"Tonight we had a plan and we worked to it.

"Next week we just need to go into it with the same attitude we had today."