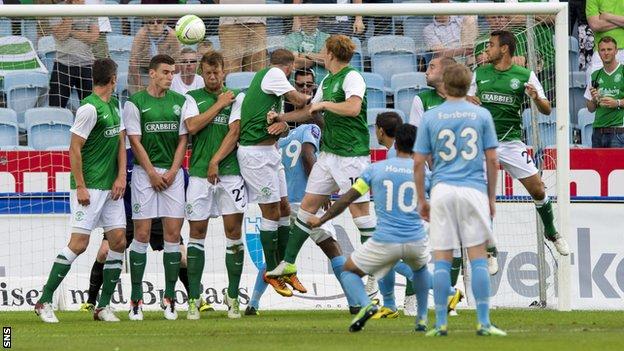 Hibernian boss Pat Fenlon insists the return leg of their Europa League second qualifying round tie with Malmo will be an altogether different affair.

"It's a different game when they come to Easter Road," Fenlon told BBC Radio Scotland. "We need to get the first goal and get the place rocking.

"We're hoping we pack the place out and get the supporters behind us. We're not without hope because we know we've created some chances away from home."

Strikes by Jiloan Hamad and Magnus Eriksson put the hosts two up within the opening 13 minutes.

But Hibs came close to an away goal when debutant Rowan Vine's shot rebounded back off a post.

"It was a sloppy start and we gave away two poor goals," Fenlon said.

"We conceded a goal and got a little bit edgy as a team, dropping a bit deeper as a team.

"We had two or three decent chances ourselves. The key was getting an away goal because then it becomes a different game, but also key was not conceding a third so we can keep the tie alive.

There were six changes to the Hibs side that lost the Scottish Cup final to Celtic in May.

Vine, Liam Craig and Owain Tudur-Jones all made their competitive debuts for the Leith outfit.

And Fenlon lamented how Malmo, whose domestic season is already well underway, had more of the momentum.

"It was a difficult game for us and they're a decent side," he said.

"In sharpness and fitness, they're miles ahead of us at the moment but we weathered the storm in the second half."