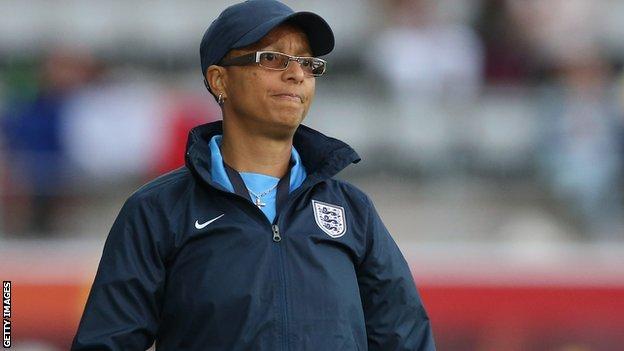 Manager Hope Powell defended her role after the England women's team recorded their worst performance at a European Championship since 2001.

"In 15 years we have made enormous progress," said Powell, who has been in charge of the senior side since 1998 and also oversees the development of the youth set-up.

"I don't think we are drastically behind [other nations]."

England were beaten 3-0 by France on Thursday to finish bottom of Group C.

Powell, who said she would take time to reflect on her own position, added: "We are sixth in the world, or we were, and fourth in Europe so we have to keep faith in what we are doing."

England reached the Euro 2009 final, but failed to win a game in Sweden and picked up one point, the same tally they managed at Euro 2001.

Defeat by France, who are tipped as one of the tournament favourites and ranked third in Europe, was perhaps understandable.

But a failure to beat Russia, who are the worst ranked team at Euro 2013, after conceding a last-minute winner to Spain in their opening game ensured England failed to match their form in qualifying.

England arrived in Sweden with an 11-game unbeaten run yet lost 4-1 to the hosts in a pre-tournament friendly.

And Powell said: "We struggled in the tournament, we didn't quite click. We put in some brave efforts but we just weren't good enough.

"We think the preparation was spot-on in terms of the opposition we had and the camp itself, but we just didn't perform.

"Certainly against Russia, we didn't perform, we didn't play our best against Spain and it was a gallant effort against a very good France side. We went for it and it just wasn't good enough."

Despite their poor showing, Powell insisted that the team was not lagging behind other European nations.

"There is no point in saying we have reached our peak because we haven't," she added. "It's really important that we keep up with those surging European nations like France and Spain."

Football Association director of elite development Dan Ashworth said this week that the governing body would be creating an elite women's role.

Powell said: "There are a lot of changes at the Football Association and I will look at those changes and go from there."

But asked if she still had an appetite for the England coach's job, she said: "Absolutely. We have the under-19s European Championship which is just around the corner.

"It's important our youth teams do well because they are the future of English football and we go again [for the World Cup qualifiers] in September.

England skipper Casey Stoney insisted the players would "go away and reflect" on their poor results in Sweden.

"We need to analyse, work harder at our clubs and dust ourselves down and say this is not good enough if we want to win trophies," said the Lincoln defender.

"I cannot say it is a lack of effort, we tried our hardest but we were found wanting."

Influential forward Kelly Smith, who was only fit enough to make second-half substitute appearances against Russia and France, said she was devastated by the manner of their performances.

"We gave it everything - we did every game," said the Arsenal player, who was a doubt for the tournament with a shin injury. "It just didn't click and we can't put our fingers on why.

"It hasn't been good enough. The quality is not there at the minute. Everyone has got to go away and think about our individual performances and learn from it."

346 comments
Back to top
unknown