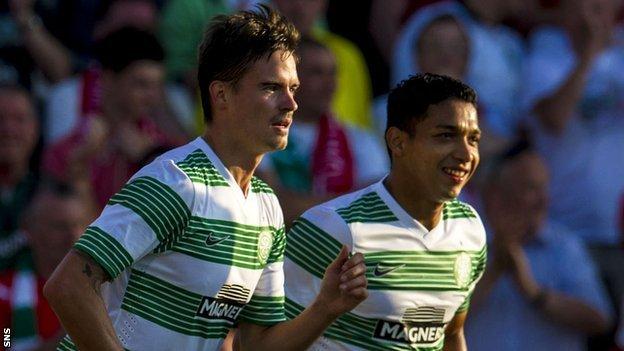 Celtic are likely to face Elfsborg should they progress to the Champions League third qualifying round.

while Elfsborg lead Daugava Daugavpils 7-1 from the first leg.

Hibs will face Swansea in Europa League qualifying if they overcome Malmo while Motherwell take on Kuban Krasnodar.

St Johnstone will face Valletta FC or FC Minsk should they progress at Rosenborg's expense.

ahead of next week's return leg in Perth.

going into their home leg against Swedish side Malmo.

Last season, Celtic beat another Swedish side, Helsingborgs, en route to reaching the group stages of the Champions League.

and scored in the 7-1 defeat of Latvian outfit Daugava in Sweden.

Celtic/Cliftonville were drawn as the home team for the first leg of the next round, which will take place on 30 or 31 July with the second leg on 6 or 7 August.

Hibs and St Johnstone play their respective matches against Malmo and Rosenborg next Thursday. The dates of the legs for the Europa League third qualifying round are 1 and 8 August.

Motherwell were drawn as the home team in the third round while Rosenborg/St Johnstone and Malmo/Hibernian came out the draw as away sides.

In both the Champions League and the Europa League, winning sides from the third qualifying round progress to the two-legged play-off stage.

And teams which are beaten at the third qualifying round stage of the Champions League enter the draw for the Europa League play-off round.