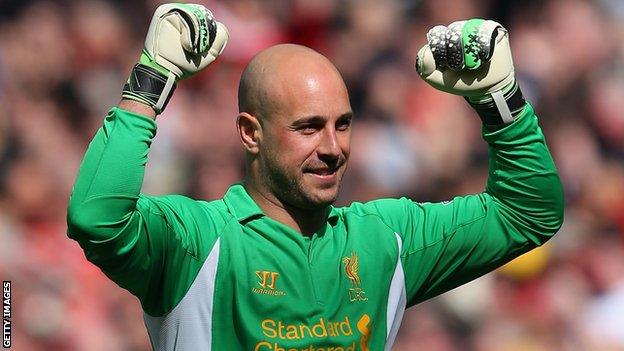 Liverpool goalkeeper Pepe Reina is to join Napoli on a season-long loan deal.

Napoli coach Rafael Benitez moved swiftly for his fellow Spaniard, and former number one during his spell at Anfield, after failing in his bid to sign Julio Cesar from QPR.

Reina, 30, was due to report back for training on Sunday before flying out to join Liverpool's pre-season tour.

Youth team goalkeeper Danny Ward has flown to Australia in to provide back-up to Mignolet and Brad Jones.

Reina, one of Liverpool's highest earners, was a mainstay of Benitez's side during his successful spell at Anfield and they have remained on good terms.

The Reds' former goalkeeping coach Xavi Valero has already joined Benitez at Napoli and Reina is known to regard him as a key part of his success.

The Italian side can also offer Champions League football after finishing second in Serie A under previous coach Walter Mazzarri.

Reina joined Liverpool from Villarreal in 2005 after starting his career with Barcelona.