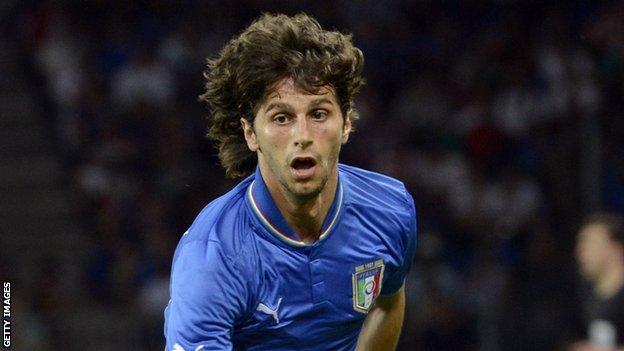 Forward Fabbrini, 22, has signed a deal until 2017, while defender Gabriele Angella has agreed a five-year deal.

The club also expects deals for Marco Cassetti, Davide Faraoni and Javier Acuna to be confirmed.

On top of those seven Daniel Pudil will join from Granada following his loan spell last season.

The Hornets, are waiting for ratification from the Football League for the latter four, but do not anticipate any problems.

Under the terms of the embargo, Watford can still sign players with prior permission from League officials.

Udinese have become a source of players for Watford as both clubs are owned by the Pozzo family, with 10 players making a loan switch between Stadio Friuli and Vicarage Road last season.

Swedish defender Joel Ekstrand and Scotland-born midfielder Ikechi Anya, who were two of those loanees last season, are training with the squad and are also expected to join.

Fabbrini has scored twice in 21 Serie A games for Udinese and netted once in eight during a loan spell at Palermo last season.

Angella is a 24-year-old Italian defender who scored four times in 14 Serie A appearances last season.

Abdi, 26, and Battocchio, 21, will be familiar to Hornets fans after playing 60 games between them last season to help Watford reach the Championship play-off final.

Paraguayan striker Acuna, 25, has agreed a deal until 2016, having joined Udinese from Real Madrid B earlier this summer.

The 21-year-old Faraoni is a former Inter defender who played 11 times for Udinese in Serie A last season and has signed terms until 2018.

Meanwhile, Czech full-back Pudil, 27, and defender Cassetti, 36, who were influential for Gianfranco Zola's side last season, have signed until 2017 and 2014 respectively.