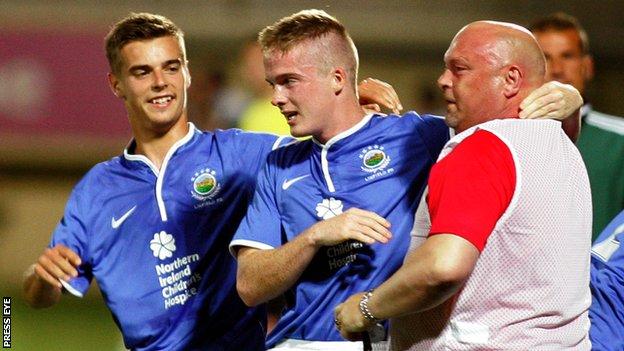 David Jeffrey hailed his Linfield players after their shock 1-0 away win over Greek side FC Xanthi in the first leg of their Europa League second qualifying round tie.

An "ecstatic" Jeffrey described his team's performance as "outstanding" as Aaron Burns hit a first-half winner.

"They have created another piece of history," added Jeffrey.

While his team now look to hold the edge heading into next Thursday's second leg at Windsor Park, Jeffrey insisted that the tie is "not over by a long chalk".

"We're not getting carried away because they are a big step up in class.

"They are a totally full-time team with a budget massively, massively bigger than ours.

"But we put in a performance of grit and determination and dare I say on some occasions, some great football.

"It's not as if we sat deep and invited them on to us.

"We did get men back behind the ball but we pressed the ball and anticipated their passes and covered their runs.

"There was also a quite fantastic shot from Michael Carvill which their goalkeeper had to make a tremendous save to stop.

"It wasn't like one lucky break although certainly they dominated possession for long periods."