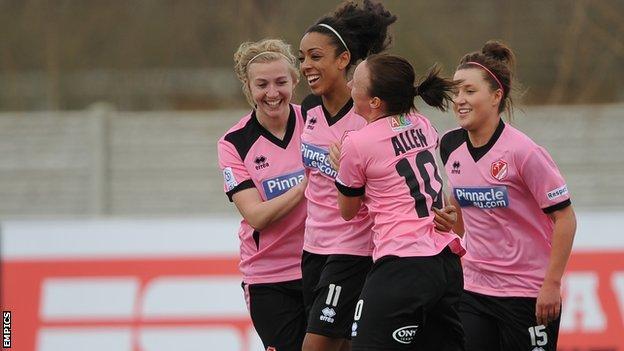 Lincoln Ladies have insisted their controversial relocation to Nottingham and decision to play as Notts County next season was their only option.

A statement says to meet the criteria for the revamped 2014 Super League they had to establish a partnership with a men's club or similar institution.

It is the chairman's belief that by incorporating the ladies' team with the men's team, we can develop a one-club mentality

The club say the shared chairmanship of Ray Trew will bring "mutual gain".

"The players will have access to the kind of facilities and resources the Notts squad have," the statement read.

"This was another key driving factor. Together with the benefits for the playing staff, there are numerous off-field advantages also, with the ladies' side able to tap into the well-established commercial, media and marketing facilities available at Notts County."

Many Lincoln Ladies supporters were angered by the move, which will see the club playing their home games around 35 miles away from their current temporary home at Lincoln City's Sincil Bank.

The Lady Imps, who had an application to relocate blocked by the FA Women's Super League in 2012, say they understand fans' concerns and "are working closely with organisations in both Nottingham and Lincoln to ensure that following the club in our new home will be as easy and affordable as possible".

The statement added: "It is the chairman's belief that by incorporating the ladies' team with the men's team, we can develop a one-club mentality that will benefit both sides and aid growth of the combined brand."

Lady Imps player Megan Harris told BBC Lincolnshire: "It's a really tough situation. I have been with Lincoln since the very beginning so it is hard to see something that I have been part of move.

"But obviously I work for the club as well and can see behind the scenes and what's going on and how the women's game is progressing. It is turning into much more of a business now and money is starting to talk.

"Liverpool are sitting top of the Super League because they had a massive cash injection and the men's team are backing them. If you want to compete at the highest level then that's what you have to do."