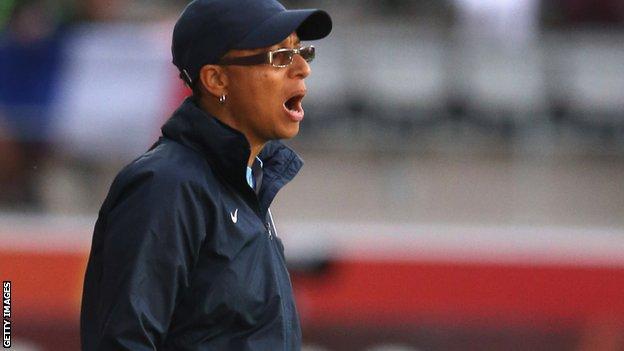 Former England players Faye White and Sue Smith have questioned whether coach Hope Powell should remain in charge for the 2015 World Cup campaign.

And Doncaster Belles forward Smith said: "A different voice can help give that rise and a lift to the players."

But the FA's Kelly Simmons defended Powell, saying: "Hope has been phenomenal."

England, knocked out of the European Championships with only one point from three matches after their 3-0 defeat by France, begin their qualification campaign for the 2015 World Cup against Belarus in September.

Appointed as coach in 1998, Powell guided England to the runners-up spot at Euro 2009, and the World Cup quarter-final two years later.

Former Arsenal defender White won most of her 90 caps under Powell and retired in March 2013 after a 17-year playing career.

"A new voice will always get a reaction out of players having to feel that they are having to prove themselves again," she told the BBC.

Smith, who plays for Doncaster Belles, suggested two possible candidates for the role.

She said: "A lot of people have said Mo Marley could come from the Under-19s to take the seniors, and [Canada coach] John Herdman is another manager that has a lot of respect in the women's game."

However, Simmons, the FA's director of the national game and women's football, said: "There's bound to be criticism of managers when results don't go your way but you've got to put it into context that while it's really disappointing, it's three games.

"Under Hope's leadership we went from not qualifying for any tournaments to a record sixth in the world in 2011, and in the last 16 months coming in we were undefeated.

"What Hope has done for the game is absolutely phenomenal."