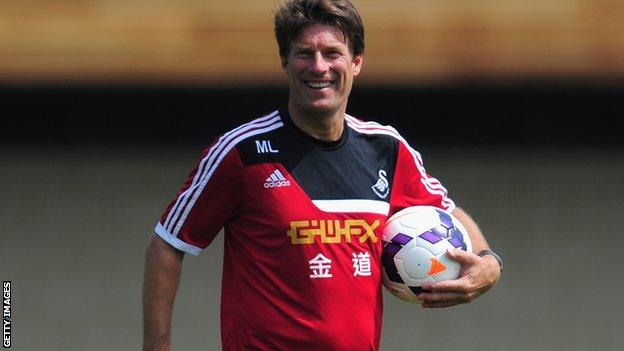 Manager Michael Laudrup is happy with the lack of travel involved for Swansea's Europa League third round qualifying tie.

Swansea City will play Malmo or Hibernian in the Europa League third qualifying round in early August.

"I'm pleased with the draw,'' said Laudrup. "Sweden or Scotland is perfect for us geographically."

Laudrup was happy to avoid a long trip to Eastern Europe.

"It was important for me that we avoided a long trip and the prospect of difficult weather conditions," said Laudrup.

"We also know the playing styles of both teams, so that is also a positive for us, although I would have preferred to be away in the first-leg rather than home. But you can't have everything."

Swansea qualified for their first European competition after winning their first major trophy when they beat Bradford 5-0 in the Capitol One Cup final at Wembley.

Laudrup played regularly in Europe, with the likes of Barcelona and Real Madrid, and he knows all about Swedish club Malmo.

"Malmo is a huge club in Sweden with a proven record and proud history," said Laudrup.

"But I'm sure Hibernian will be in there fighting until the end.''

Swansea will be at home to the winners in the first leg on Thursday, 1 August with the second leg a week later.

The Swans, who were seeded for the draw, will be competing in European competition for the first time since 1991.

Should Hibernian overcome Malmo it would see summer signing Owain Tudur Jones facing Swansea City, the club he left in 2009.

The winners of the third qualifying round ties will enter the draw for the play-offs, which will be held on Friday, 9 August.