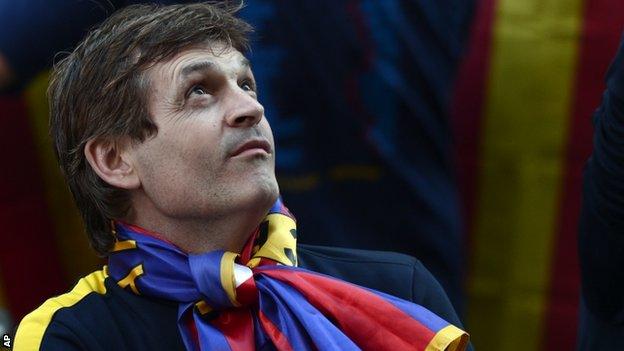 Tito Vilanova has stepped down as Barcelona manager to continue his treatment for cancer.

The 44-year-old had a tumour removed from his throat in November 2011 before suffering a relapse last year.

The club said that a new manager is expected to be announced next week.

Barcelona president Sandro Rosell and director of football Andoni Zubizarreta announced the news at a brief media conference attended by the first-team squad.

Rossell said: "Tito Vilanova will continue treatment of his illness, he will not be able to continue as Barcelona's head manager.

"This is a very difficult blow to the club, but we have overcome many difficult setbacks."

Barca forward Lionel Messi has offered his support to Vilanova, writing on his Facebook page: "Strength Tito! We are all with you in this fight!"

The Argentinian's club-mate Andres Iniesta added in the Spanish newspaper AS: "Tito will once again win this terrible battle facing him. On behalf of the players and everyone, I send him all my love and support. At the end of the day, this is about a person, not a coach."

Barca's friendly with Polish club Lechia Gdansk on Saturday night has been cancelled.

Vilanova replaced Pep Guardiola as manager in June 2012, having previously worked as his assistant.

He joined Barca's coaching staff last month as an assistant to Vilanova and Jordi Roura, who took charge of the first team when Vilanova was absent last season.

Rubi was head coach of Girona last term and led the club to the Segunda Division play-offs, where they lost to Almeria.