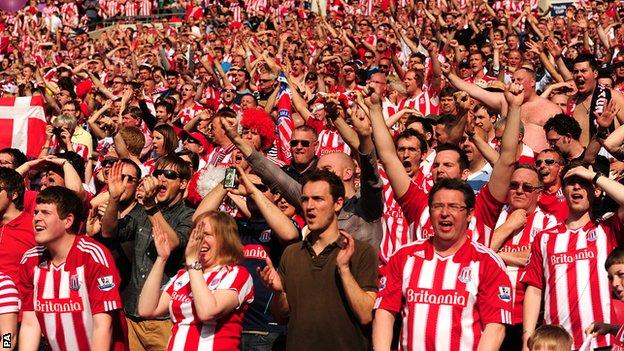 Stoke City are offering supporters free coach travel to all 19 of their Premier League away games this season.

Beginning with the trip to Liverpool on the first day of the season, coaches will take fans from the Britannia Stadium to each away league fixture.

The club are using the increase in TV revenue to fund the initiative.

"We've done it for the odd game, but not the whole season. I'm not aware of anyone that has," chief executive Tony Scholes told BBC Midlands Today.

Stoke previously subsidised ticket prices for those travelling to an FA Cup quarter-final tie at Anfield, waiving their right to 45% of the away ticket sales so they could offer tickets to fans at £20 instead of £35.

"We were looking at this around a year ago, looking at what we could do to keep football as affordable as possible," Scholes continued.

"Our home match tickets haven't gone up for the last five years but everyone knows following their team away from home can be expensive.

"With the new broadcasting deals that came in, that arguably gave us the opportunity to do something and spend a little bit of money back on the supporters."

The new £3bn Premier League TV deal will see top-flight sides receive £55m a year, and even if a club is relegated, they will still receive parachute payments of around £60m.