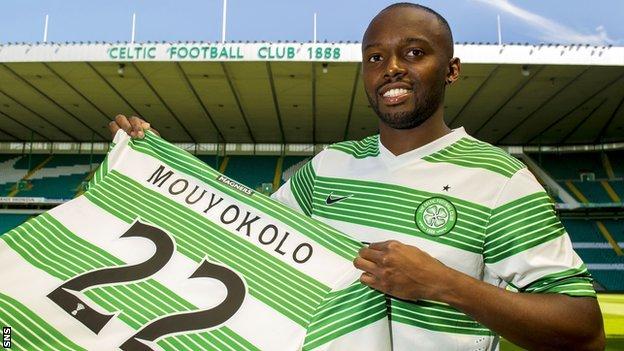 Steven Mouyokolo is delighted to have signed a contract with Celtic after taking the "risky" decision to leave Wolves earlier this year.

The defender had 18 months left on his contract when he left in January.

"It was a big, big choice for me," he explained. "It's really hard to leave a club when you have to do your rehab.

"I've been working really hard for three months to get back fit. It was really hard but I managed it and I'm really happy."

Injury problems have restricted Mouyokolo's chances of playing regular football in recent seasons, having first moved to the UK from his native France by signing for Hull City in 2009.

"I know that, with all the injuries I had, I probably lost confidence because when you don't play that much and get injured, you lose your confidence," said the 26-year-old

"I'm really, really pleased that I had the chance to come here and show that I was finally fit and fine.

"I played with [former Celtic striker] Jan Vennegoor of Hesselink [at Hull]. We spent a lot of time together and he talked to me about Celtic a lot. He really enjoyed it here.

"I had [former Celtic defender] Bobo Balde on the phone when we were in Germany [for pre-season]. We had a long chat and he was just telling me that he loved it here as well.

"It's a big step forward for me, it is. I'm really grateful to sign for Celtic, which is a big move for me."

"He's not played much football," he explained. "We liked him a few years ago when he was at Hull and obviously he was playing Premier League football then.

"He's had a few injuries but he's come back, trialled really well, played well in the games, came through the medical okay and he's prepared to really work at it.

"I think it'll be a good bit of business for us."

Meanwhile, Lennon is looking to do more transfer business next week.

"I'm hoping that some time next week, we can get through with one or two," he added.