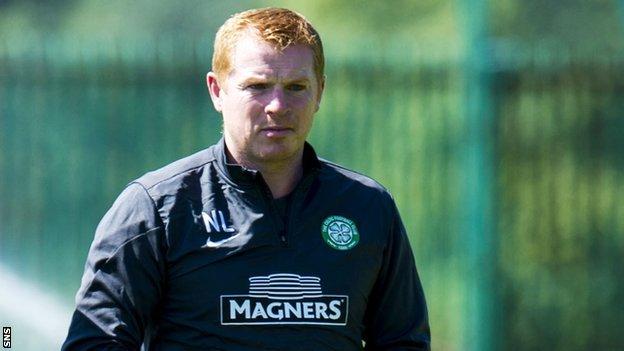 Neil Lennon says likely Champions League qualifying opponents Elfsborg are "probably one of the most difficult" Celtic could have drawn.

Lennon's side hold a 3-0 lead against Cliftonville while Elfsborg are 7-1 up.

Meanwhile, Lennon feels it would be best if Mohamed Bangura, who is , did not play in the event of the two sides meeting.

"Uefa can't enforce that, there's no ruling for that but I would think it would be in Mohamed's best interests not to play the game and if I get the opportunity to speak to him, I'll be telling him that as well," explained Lennon.

"My take on it is that, in his current situation, it wouldn't be a good idea.

"He's our player at the end of the day and we've loaned him out to that club.

"Were Elfsborg to succeed in the longer term, I don't think it would look good for Mohamed for his future here.

"If he played, it would put him in a compromising situation, it would be a very difficult situation for him mentally going into the game as well so it would be best for all parties that he didn't participate in either of the ties."

When asked if former AIK striker Bangura still had a future at Celtic, Lennon replied: "The only reason we put him out on loan was for him to get game time and he's playing in an environment that he knows.

"He's done very well, he's got five [goals] in 15 [games] for them so hopefully he'll come back a better player."

Celtic/Cliftonville were drawn as the home team for the first leg of the third qualifying round, which will take place on 30 or 31 July with the second leg on 6 or 7 August.

Lennon indicated that his assistant manager, former Sweden and AIK player Johan Mjallby, would play an important part in preparations for the expected meeting with Elfsborg.

"It looks like they're going to go through, they won their home leg very convincingly but Johan will know them well, obviously," said the manager.

"We'll have them watched, I'll try and get over myself to watch them between now and the time that we play them.

"Hopefully, we'll be a few games further down the line when we play them and a bit more up to speed."

Last season's top scorer Gary Hooper did not feature in the win against Cliftonville in Northern Ireland, with the striker believed to be close to a move to Queens Park Rangers.

"It's as you were, no change," said Lennon regarding Hooper's situation.