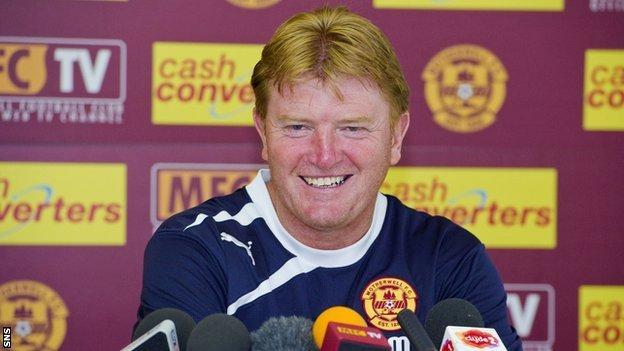 Saints beat Rosenborg 1-0 in Norway in the first leg of their second qualifying round meeting on Thursday.

"It was fantastic, St Johnstone with a positive attitude and getting a great result," said McCall.

"First and foremost we have to go over to Russia and make sure we are still in the tie but hopefully with a lead," added the Well boss.

"We've got to aim to progress into the next round. We will just be positive and do the best we possibly can.

"If we can do our best and it gets us through then all well and good."

Motherwell were drawn as the home team for the first leg, which will take place on 1 August with the return on 8 August.

And McCall admits the Fir Park club "don't know a lot" about their European opponents.

"They probably know even less about Motherwell," he explained.

"To be fair to the media team and our chief scout Bobby Jenks, I just came back from training and there were two dossiers on my table.

"They finished fifth last season and they signed the boy [Djibril] Cisse so we know bits and bobs.

"They play Zenit St Petersburg next Friday and we are all clamouring to see which one of the coaching staff will go to that because it's supposed to be a nice place.

"I think Bobby will go over and watch them and we will do our homework the best we can."

An extended run in the competition would boost Motherwell financially and McCall would accept any consequent affect on domestic form.

"I'm sure it would impact on results but we would take it right now," he added.

"You can never be grateful that you're out of the tournament.

"I was speaking to Alan Pardew about it, Newcastle played a lot on the Thursday and the league form certainly suffered - and they've got a big, big squad.

"That would be a concern but one I would happily accept if it meant going into forbidden territory."