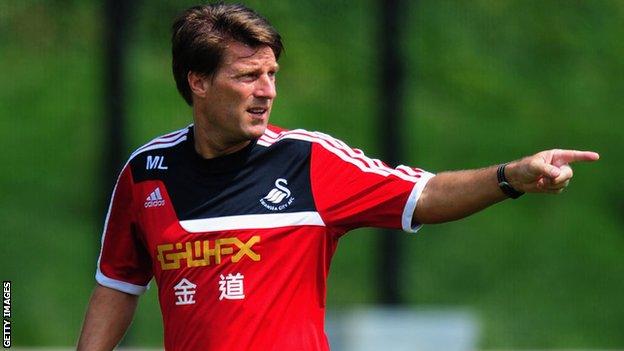 Swansea boss Michael Laudrup has denied any link with the vacant manager's role at Barcelona after Tito Vilanova stepped down through ill-health.

Vilanova left his job on Friday to continue his treatment for cancer.

Bookmakers are offering odds as short as 6-1 on former Barcelona player Laudrup taking over, but he played down the speculation.

"I really can't comment on that because you are asking me something I don't know anything about," he said.

Laudrup won nine trophies in his five years as a player at Barcelona.

And he admitted this week he was approached by a Champions League club after a successful spell coaching in Spain.

Last season Laudrup guided Swansea to their first major trophy, the Capital One Cup, and to a ninth-place finish in the Premier League.

However, the former Denmark international said he was surprised by the news of Vilanova's departure and expected everyone at Barcelona to be "shocked" by the announcement.

Speaking after Swansea's 5-0 win over Yeovil in a pre-season friendly on Friday, Laudrup said new signing Wilfried Bony had not yet been to Swansea because of a delay over his work permit.

The Ivory Coast international striker was announced as a record £12m signing from Vitesse Arnhem on 11 July, but has so far not travelled to Britain after making a brief appearance for the Swans in a friendly during their Dutch tour.

"The club is still working on it, so he's still in Holland," said Laudrup.

"We gave him permission to train with Vitesse, otherwise it will be too many days without doing anything.

"Those are the things you have to cope with as well when you sign players from outside the EU, but I hope he will be here next week."