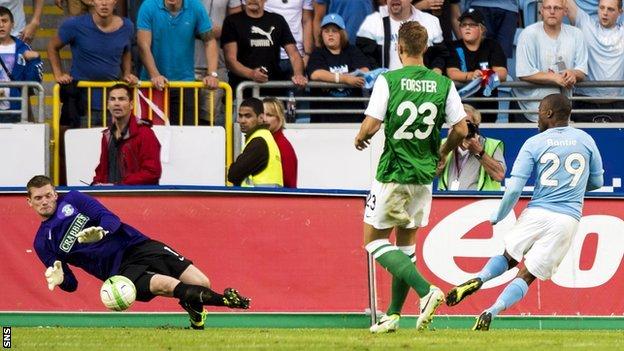 Goalkeeper Ben Williams believes the chance to play Swansea City is "a great incentive" for Hibernian to overturn the Europa League tie with Malmo.

ahead of Thursday's return leg of the second qualifying round at Easter Road.

"It's a chance to play English Premier League opposition and earn money for the club to help strengthen the squad for the coming season," said Williams.

"But first and foremost we've got a difficult home match against Malmo."

Our supporters have an important role to play on Thursday

, which will take place on 1 August with the return on 8 August.

Williams made some important saves after Hibs lost two early goals against Malmo in Sweden but Rowan Vine almost halved the Leith side's deficit when his shot struck the post.

"We will need to be more clinical with our chances and make home advantage count," added Williams on the Hibs website.

"Easter Road is a special place to play and a night of European football there will probably make the atmosphere even better.

"We need to make Easter Road as full and as hostile as possible. Our supporters were fantastic on Thursday night - the noise they made throughout the night was phenomenal.

"The fact they were still there at the end backing the team reminded us all what a great club it is.

"Our supporters have an important role to play on Thursday and the squad are all looking forward to the match."